Rajya Sabha chairman M. Venkaiah Naidu said that some members “grossly crossed all barriers of all parliamentary decorum and etiquettes 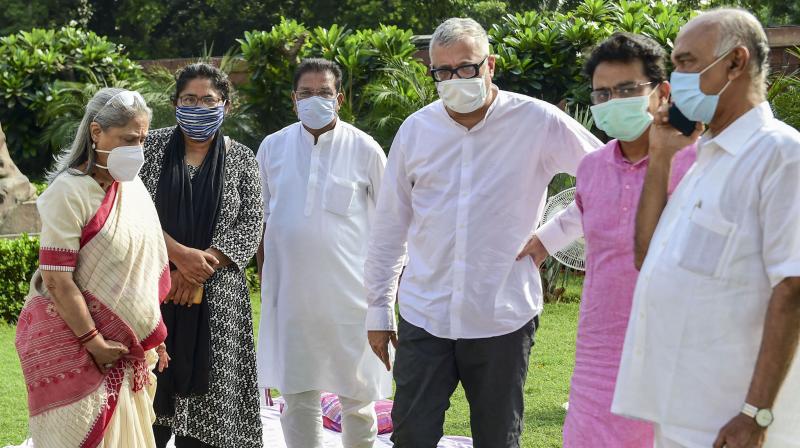 Samajwadi Party MP Jaya Bachchan meets suspended MPs staging a protest over their suspension from the remaining Monsoon Session of Parliament over the ruckus created in Rajya Sabha, at Parliament House in New Delhi. — PTI photo

New Delhi: A day after Rajya Sabha witnessed unruly scenes with some members tearing papers, climbing on tables, shouting slogans and throwing the rule book at the Chair, eight members of Opposition parties were on Monday suspended for their “unruly behaviuor” for the remainder of the monsoon session.

Commenting on their suspension, Rajya Sabha chairman M. Venkaiah Naidu said that some members “grossly crossed all barriers of all parliamentary decorum and etiquettes… thereby bringing down the prestige of the House.”

Opposition members say that the chaos ensued when the Chair did not allow division of votes on the farm Bills, which was passed by voice vote.

Opposition parties hit out at the government over the suspension of eight Rajya Sabha MPs.

After the House adjourned for the day, suspended members sat on “indefinite” dharna in front of Mahatma Gandhi’s statue in Parliament premises.

Carrying pillows and blankets at the protest site, the MPs said "we will not budge".

AAP’s Sanjay Singh said, "Wake up crores of farmers of the country! The BJP government has mortgaged your life to Adani-Ambani, wake up and oppose this black law. We are on an agitation in Parliament, you should agitate outside. The BJP government has passed a black law against farmers. We were terminated for opposing the Bill.”

West Bengal chief minister Mamata Banerjee tweeted in their support. "Suspension of the 8 MPs who fought to protect farmers' interests is unfortunate and reflective of this autocratic Govt's mindset that doesn't respect democratic norms & principles. We won't bow down & we'll fight this fascist Govt in Parliament & on the streets," she said.

The eight members were suspended after minister of state for parliamentary affairs, V. Murleedharan, read out a motion seeking their suspension on Monday. It was put to vote and was carried by voice vote.

Soon after the Zero Hour, Mr Naidu said that he was “pained” at the happenings during the passage of the Farmer's Produce Trade and Commerce (Promotion and Facilitation) Bill, 2020, and the Farmers (Empowerment and Protection) Agreement of Price Assurance and Farm Services Bill, 2020, on Sunday. The chairman said that some members came to the well of the House and hurled papers, the rule book at the deputy chairman and abused him.

Mr Naidu also rejected the no-confidence motion moved by 47 members from the Opposition benches against deputy chairman Harivansh, who was presiding when the ruckus over farm Bills took place on Sunday, citing Rajya Sabha rules and precedents.

Mr Naidu said that he had gone through the entire proceedings of the House on Sunday in the light of the allegations made against the deputy chairman.

Mr Naidu said the deputy chairman was physically threatened and if marshals had not been called on time “what would have happened to the deputy chairman… Such behaviour was very unfortunate, unacceptable and condemnable and one that tarnished the image of Parliament, particularly of the House of Elders.”

According to reports, amidst the chaos on Sunday, when the Opposition was protesting the Bills, the telecast was muted, cutting off viewers from what members of Parliament were saying. After a short adjournment, deputy chairman Harivansh Narayan Singh decided to put the Bills to a voice vote instead of calling for a division.

A voice vote involves the chairman putting a question to the House and then asking members to put forward their opinion in the form of ayes (yes) or noes. Based on a rough measure of which side is louder, the Speaker decides if the motion has passed or not. The other method involves actual voting by MPs, electronically.

Voice vote is not precise, and can be inaccurate, given that the Chair decides what the opinion of the House is based on which side he feels is louder.