Modi said the only objective of the BJP-led governments at the Centre and in Chhattisgarh was the welfare of the poor and the common people. 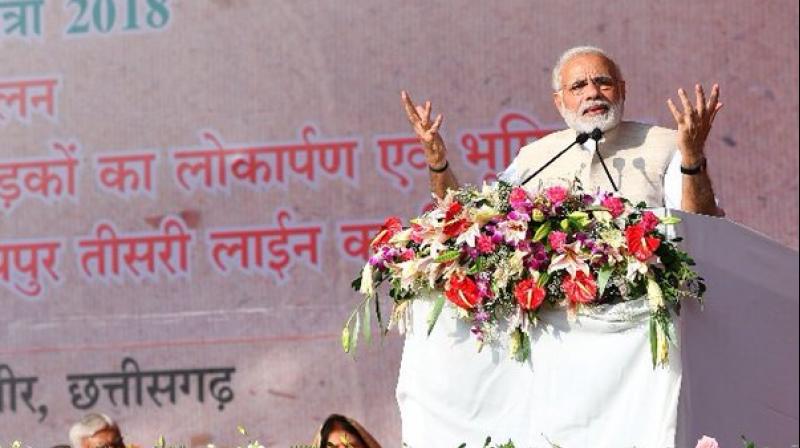 "Despite allegations, rumours and misinformation, people of Chhattisgarh have been giving stable governments," he said. (Photo: Twitter | @narendramodi)

Janjgir-Champa (Chhattisgarh): Prime Minister Narendra Modi on Saturday virtually kicked off the election campaign for the Bharatiya Janata Party (BJP) in Chhattisgarh by saying that people of the state are mature enough to elect a stable government.

Addressing a public rally in the city, he said the only objective of the BJP-led governments at the Centre and in Chhattisgarh was the welfare of the poor and the common people.

"Despite allegations, rumours and misinformation, people of Chhattisgarh have been giving stable governments," he said.

PM Modi said Chhattisgarh was known for violence by Naxals, explosion and bloodshed, and the BJP government has overcome all these challenges.

"Chhattisgarh has created its own place among the states which are on the path of development," he said.

The prime minister said the central government will ensure that power connection is given to each home across the country under the Saubhgya Yojana.

He also said Chhattisgarh has changed the perception that smaller states suffer from political instability.

PM Modi said the NDA government did not believe in making schemes for vote bank or to win elections. "Programmes and policies framed by my government are for benefit of all, not targeted at a particular vote bank," he said.

Prime Minister Modi also said the BJP wants to create a new, modern Chhattisgarh and "we are moving ahead with the mission of Sabka Saath, Sabka Vikas".

The state Assembly elections in Chhattisgarh are likely to take place by the end of this year.