Chidambaram has strongly denied allegations, saying payments were for consultancy and his son was in no way associated with that company. 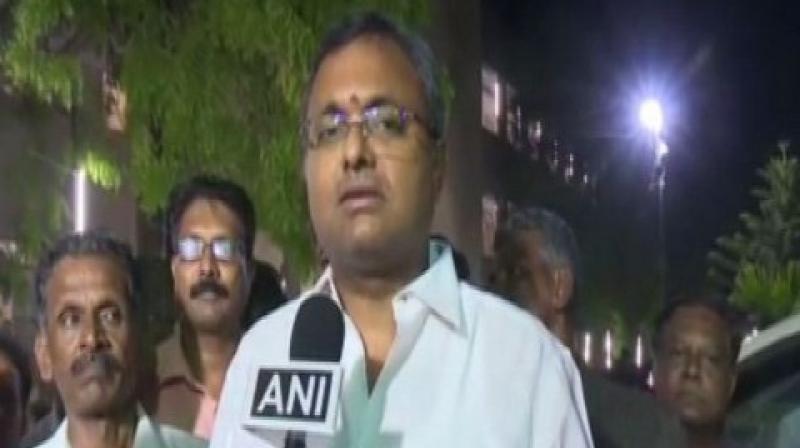 After former finance minister P Chidambaram was arrested by CBI on Wednesday night in connection with INX Media case, his son Karti Chidambaram on Thursday said they will fight this 'trumped-up and vindictive act' by a 'pliant agency' politically and legally. (Photo: File)

Chennai: Karti Chidambaram on Thursday termed the arrest of his father P Chidambaram as a "political vendetta" and vehemently denied any association with either Peter Mukherjea or his wife Indrani Mukherjea, the promoters of INX Media.

Karti arrived here this morning from Chennai, hours after his father was arrested on Wednesday night after high drama at his residence here in the INX Media case. "This is not merely targeting of my father but the targeting of the Congress party. I will go to Jantar Mantar to protest," said Karti as he stepped out of the Delhi airport.

Karti said there was no legal necessity for Chidambaram to appear before the CBI and denied that his father had been in hiding. He said despite several efforts by the CBI, the agency didn't have a case against them.

"First and foremost we are being targeted. There is no legal requirement for my father to be available to anybody...My father is a vehement, vocal and articulate critic of this government. Case has no legal basis, charges trumped-up," said Karti, who said that he knew the processes agencies use and never has the CBI given two hours notice to anyone.

"I have been summoned 20 times and raided four times. Nobody has ever been raided as many times but they still don't have a case....each time I (was summoned) was given a week's notice," he said.

When asked about his association with Peter and Indrani Mukherjea, Karti said he neither knew them nor has he met them. "I have never met Peter Mukherjea. Have never met Indrani Mukherjea, only time I met her was during the CBI interrogation in Byculla jail. Never met anyone in FIPB (Foreign Investment Promotion Board), don't know the process of FIPB", he said.

Chidambaram, who spent the night in a CBI guest house will be questioned in the alleged corruption in Rs 305 crore clearance given to INX media when he was the Union finance minister.

The firm once promoted by Peter and Indrani Mukerjea, both in jail for murdering the latter's daughter Sheena Bora, had allegedly made payments to a firm linked to the former finance minister's son Karti Chidambaram, the CBI has said in the FIR.

Chidambaram has strongly denied the allegations, saying the payments were for consultancy and his son was in no way associated with that company.

On Wednesday night, his son Karti Chidambaram on Thursday said they will fight this "trumped-up and vindictive act" by a "pliant agency" politically and legally.

"This is a totally vindictive and malicious act done by a pliant agency. This is only done to settle political scores. There is absolutely no necessity to have done this. It has been done only to create a spectacle on television and to tarnish the image of the Congress party, and to tarnish the image of the former Finance and Home Minister. This is a completely trumped-up case in which he has absolutely no connection whatsoever. This is being done only for political reasons," Karti told ANI here.

When asked about comparison with Union Home Minister Amit Shah's arrest in 2010, Karti said, "I am not willing to make any kind of comparisons. I can only comment on the case pertaining to what is happening right now. All I can say is this is a completely trumped-up and vindictive act."

He added, "He (P Chidambaram) has been on anticipatory bail since May last year. The judgment has been reserved since January. And all of a sudden the judgment which came out, I respectfully disagree with it and that is why we have appealed in the Supreme Court. The matter is coming up on August 23, now we will have to see its legal status. We will fight this out politically and legally."

Chidambaram was arrested in the INX Media case on Wednesday night after he failed to get relief from the Supreme Court over CBI and ED's pursuit of him as the matter was not heard by the court despite repeated efforts of his lawyers.

After his arrest by the CBI from his Jor Bagh residence, Chidambaram, 73, was taken to headquarters of the probe agency. He is likely to be produced before a CBI court at the Rouse Avenue on Thursday.

Earlier, the former Finance Minister made a dramatic appearance at the Congress headquarters in Delhi and addressed a press conference in which he rejected the charges against him and his son in the INX Media case and said "lies" were being spread by "pathological liars."

He then left for his Jor Bagh residence from the Congress office and teams of the CBI and the ED reached soon after. He was arrested in the glare of media after over an hour-long drama during which some officials scaled the gates to gain entry to his house. Supporters of the former Finance Minister raised slogans and tried to stop officials from taking him away. Some of them also blocked the road in protest.

CBI sources said that Chidambaram was arrested on an arrest warrant issued by a competent court.

The CBI and ED filed caveats in the Supreme Court over Chidambaram's plea seeking protection from arrest in the INX media case.

Rejecting the charges against him and his son Karti in the INX Media case, Chidambaram said FIR does not impute any wrongdoing by him and there was no chargesheet either by the CBI or ED before the competent authority.

The CBI had on late Tuesday night put up a notice outside his residence to appear before them in two hours prompting his lawyer to request the investigation agency not to take any coercive action until the hearing of Chidambaram's plea in the Supreme Court on Wednesday.