Mukhtar Abbas Naqvi said the government was against any kind of violence and the House can take action as per the rules. 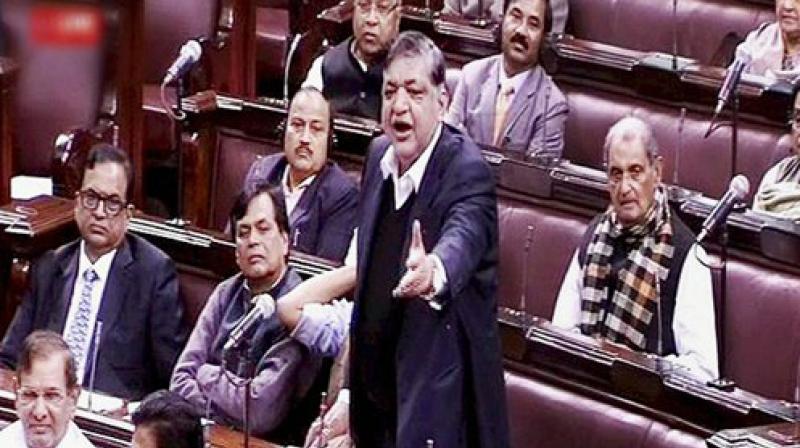 New Delhi: After Opposition members in Rajya Sabha expressed serious concern over telecast and publication of expunged remarks of SP member Naresh Agarwal against Hindu deities, Chairman Hamid Ansari on Friday said the secretariat has been asked to issue a showcause notice and further inquire into the matter. The issue also led to a brief adjournment and uproar when SP and Congress members trooped into the Well, demanding action against the media organisations for disseminating the expunged remarks made on Wednesday during a discussion on lynchings.

“I have heard this morning’s proceedings. I have received a notice from some members raising a question of privilege against a TV channel and some newspapers for making defamatory remarks against a member of this House,” said Mr Ansari, adding that the Rajya Sabha secretariat has been asked to issue a showcause notice and further inquire into the matter.

Mr Agarwal also alleged that BJP’s youth wing members had attacked and van    dalised his house in Delhi while a ruling party worker filed an FIR against him in Meerut in connection with these remarks. He said if a member is threatened for speaking in the House, it is disrespect of the MPs as well as that of the House. “Isn’t this lynching?”

Earlier, terming the issue raised by the Opposition as a serious matter, deputy chairman P.J. Kurien said if anything has been expunged, no one can print it and nobody has the authority to file an FIR on the basis of the expunged remarks. He asked the government to inquire into the incident and take action.

Minister of state for parliamentary affairs Mukhtar Abbas Naqvi said the government was against any kind of violence and the House can take action as per the rules.

He, however added that the government was against “censorship”.

As Opposition members continued shouting slogans, he even said that “why not stop live telecast (House proceedings)”.

Prof. Kurien repeatedly called for material evidence, saying he could not rely on WhatsApp messages as some members were displaying on their mobile phones.

TMC’s Sukhendu Sekhar Roy and Congress’s Anand Sharma sought immediate initiation of privilege proceedings against those newspapers and TV channels which had disseminated the expunged remarks.

“I cannot act like an instant coffee. Notice has to be examined. (Give notice) I will come back today itself,” prof. Kurien said. As the opposition members continued to raise slogans, he adjourned the House for about 15 minutes till noon.