The BJP govt’s failure to follow its counterparts in other states has given the Congress opportunity to step up pressure on loan waiver. 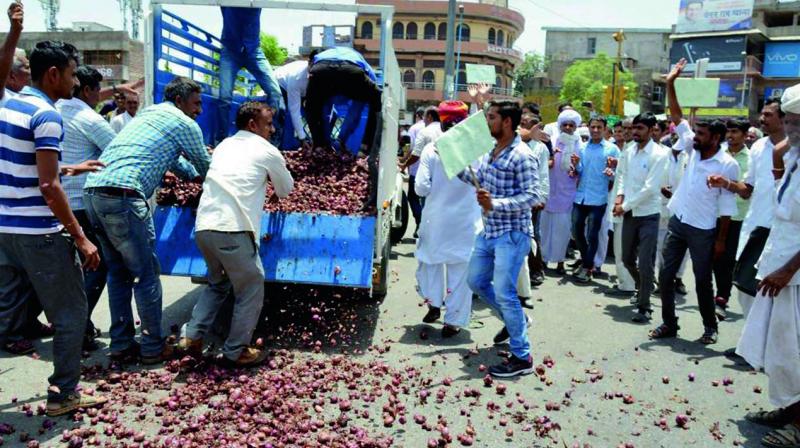 Farmers scatter onions on a road during a protest in Jodhpur. (Photo: PTI)

Jaipur: From a seemingly invincible position, the ruling BJP in Rajasthan suddenly finds itself on a slippery wicket. As Assembly election draws near, the party that set itself an over ambitious target of winning 180 seats, looked vulnerable in wake of protests by farmers and members of the Rapt community, which is its traditional vote bank.

In fact, the recent turn of events has revealed chinks within as the problems left at the doorstep of chief minister Vasundhara Raje. This was particularly evident in case of dreaded gangster Anandpal Singh’s encounter. Even as the state government grappled with violent protests from Rajputs alleging political conspiracy and demanding CBI inquiry; senior ministers, including the CM’s loyalists, did not appear to make an effort to address the crisis.

Home minister Gulab Chand Kataria’s first instinct was to distance him from the police action. “I was sleeping when the CM called me in the midnight to break the news,” he said.

Whether the home minister was smarting from past experiences when he faced a CBI inquiry in the Sohrabuddin encounter case during his previous stint as home minister, or it was an innocuous statement from a minister, who prides himself being a RSS swayamsewak, was indication of Sangh’s often strained ties with Ms Raje is, anybody’s guess.

Not to be left behind — following violent protests in Anandpal’s village, Sanwr-aad, after his cremation — another detractor, former minister Narpat Singh Raj-vi, who also happens to be the son-in-law of former vice-president Bhairon Singh Shekhawat, did not miss the opportunity to make things difficult by shooting off a letter to BJP national president Amit Shah complaining discrimination and harassment of Rajputs.

However, what baffled everyone was the CM loyalists — especially Rajput leaders and ministers — who instead of using their influence in the community, remained silent or took side with the agitators. Ministers who owed their existence to Ms Raje maintained a stony silence while those in the party like Lokendra Singh Kalvi and former minister Devi Singh Bhati openly took side of the agitators.

Although the government finally managed to buy peace by accepting to the community’s demand of a CBI inquiry, now her own ministers and MLAs were caught on camera criticising the move claiming that it would open a “Pandora’s box”.

Another potential threat to the BJP’s 2018 campaign in the desert state is agrarian crisis, which has taken centre stage even at the national level. The BJP government’s failure to follow its counterparts in other states has given the Congress opportunity to step up pressure on loan waiver claiming that 10 distressed farmers have committed suicide in last one month. Congress vice-president Rahul Gandhi has already addressed a rally in tribal-dominated Banswara to be followed by a padyatra by PCC president Sachin Pilot in Ms Raje’s constituency.

Interestingly, the Congress was late entrant to the farmers’ agitation that was started by RSS affiliated Bhartiya Kisan Sangh and Kisan Mahapanchayat, which is headed by Rampal Jat, again a BJP man who was not only a general secretary of the state unit but close to Ms Raje.

As things stands, not only the target of 180 appears in jeopardy but also repeating its 2013 performance, when it won 163 Assembly seats, would be a tough task. For Ms Raje, the situation is throwback to 2008, when she narrowly lost despite fighting a twin battle against the Opposition outside and within.