Congress MPs say govt has done nothing for farmers, walk out

On Wednesday, the discussion on the farmers’ plight had continued till 10.30 pm into the night. 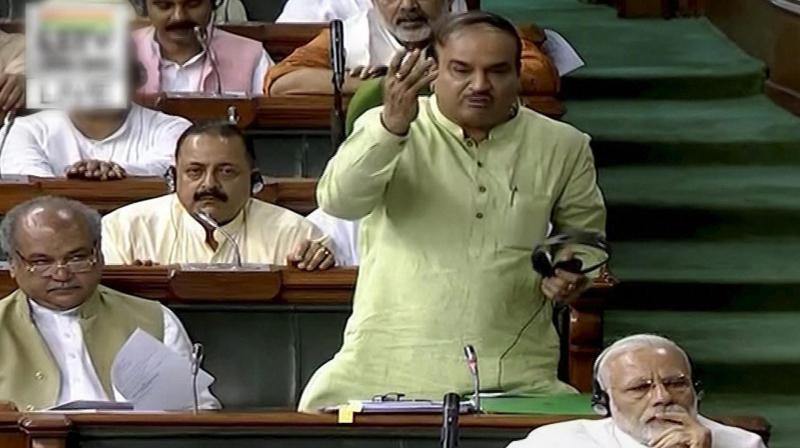 New Delhi: The Lok Sabha witnessed vehement exchanges on Friday between the ruling BJP and Congress MPs over the miserable plight of farmers in the country.

While the Congress accused the government of doing nothing to help farmers, the government said the Congress was shedding “crocodile tears”. The sloganeering included “Kisan hatya bandh karo (stop the murders of farmers)”, “Kisan karza maaf karo (waive off farmers’ loans)”, etc.

The Congress protests began in the Question Hour and continued about 18 minutes into the Zero Hour with Speaker Sumitra Mahajan stressing repeatedly that the protests were not proper. Among the most vocal Congress MPs were Deepender Hooda, Adhir Ranjan Choudhury and Sushmita Deb. At about 12.18 pm, the Congress staged a walkout with Sonia Gandhi leading the trooping out before stepping into the House again after seven minutes.

Mr Hooda said the farmers had hit the streets from Andhra Pradesh to Haryana and Madhya Pradesh and his party was not satisfied with the government’s reply at which parliamentary affairs minister Ananth Kumar said the Congress was only shedding “crocodile tears” and trying to garner “false sympathy” and that it had walked out of the House on Wednesday when other members sat for hours to debate the issue.

“Where were Sonia Gandhi and Rahul Gandhi? Where were you? Now you are shedding crocodile tears... You are now showing false sympathies,” he said.

On Wednesday, the discussion on the farmers’ plight had continued till 10.30 pm into the night.

While the BJP MPs asked what the Congress government did for farmers in the past 60 years, Mr Hooda said farmers were deeper into debt in the last three years of the NDA government than they were ever earlier.

Raising the Darjeeling issue, Md. Salim (CPM) sought a tripartite meeting between the Centre, West Bengal and the Gorkhas for a resolution while Thokchom Meinya, Congress MP from Manipur, raised the spectre of devastating floods that is ravaging the Northeast region.