BJP is a party of principles, democracy, says Amit Shah

BJP governments do not take decision that people like, but they take decisions that are good for the people, says Shah. 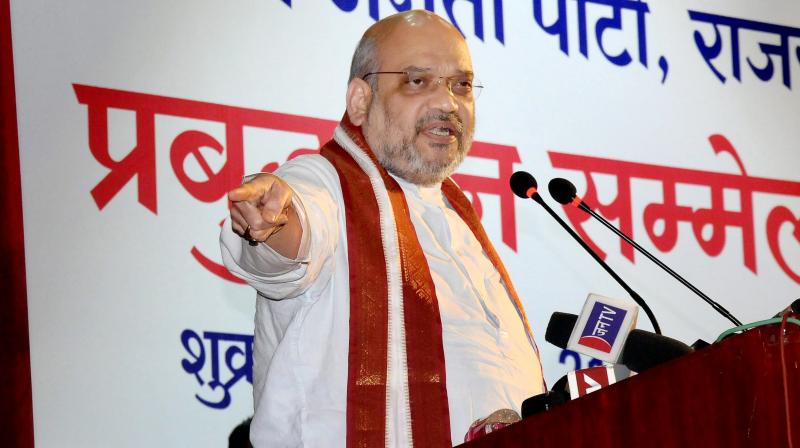 Jaipur: The BJP is the only party with principles and internal democracy, claimed party chief Amit Shah here on Friday. Mr Shah was addressing a gathering of prominent citizens from across the state.

“This is the only party where a booth-level worker like me can rise through the ranks and become national president and son of a tea vendor can become Prime Minister,” Mr Shah said.

Taking a dig at the party’s main opponent Congress, the BJP president asked the audience if it knew who was going to replace him as the next president of the BJP. When the people replied ‘no’, he then asked them if they knew who will be the next Congress president, the crowd said Rahul Gandhi.

“A party that can’t ensure internal democracy cannot safeguard democracy in the country,” he quipped while emphasising that this was key difference between the BJP and the Congress, whom he also accused of corruption. “There was Rs 18 lakh crore worth of scam during the UPA government but not a single case has taken place since the BJP government lead by Narendra Bhai Modi has come to power,” he claimed.

The BJP chief said in its 60 years of rule, the Congress can hardly boast three achievements whereas the Modi government has taken 50 important decisions, including surgical strike, GST and demonetisation.

“BJP governments do not take decision that people like, but they take decisions that are good for the people,” said the BJP president.

Shah alleged that in the six decades of Congress rules there was no development saying that it was lack of development and administrative discipline that experts came up with word “BIMARU” for Bihar, MP, Rajasthan and Uttar Pradesh. According to Mr. Shah, Rajasthan and Madhya Pradesh have come out of BIMARU status while Bihar was on the verge of it till there was coalition government of JD (U) and BJP but has fallen back on development scale while five years later Uttar Pradesh where the BJP has formed the government will also come out of BIMARU status.

Mr. Shah who is on a three day visit as part of his countrywide programme asked party workers to work for the next 25 years instead of preparing for just the next elections. He said that he didn’t come to review state government’s work but he would like to see that how the government’s functioning can benefit the party.