Another blow for Congress as Gujarat leader Shankarsinh Vaghela quits

Waghela alleged that there was a “conspiracy” to remove him from the Congress. 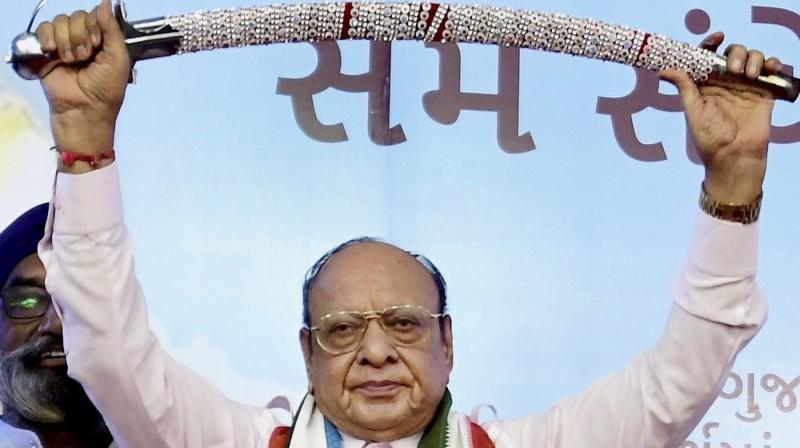 Leader of opposition in Gujarat assembly Shankarsinh Vaghela at a public meeting of his supporters on his 77th birthday, where he announced he was expelled from the Congress, in Gandhinagar. (Photo: PTI)

New Delhi: A day after the party was hit by cross-voting in favour of NDA’s presidential candidate Ram Nath Kovind in Gujarat, tremors continued to rock the Congress with senior party leader and former Gujarat chief minister Shankarsinh Vaghela quitting the party on Friday.

While Mr Vaghela claimed that he was “expelled” from the party, the Congress refuted the charge saying that “no action was taken against him” and quitting the party was Mr Vaghela’s “own decision”.

Mr Vaghela, who turned 77 on Friday told the media in Gujarat; “Congress party ne mujhe 24 ghante pehle nikal diya yeh soch ke ki pata nahi main kya kehta; Vinaash kal vipreet buddhi,” (The Congress party sacked me 24 hours ago as they did not know what I was going to say at this rally. When one’s destruction is imminent, they begin to lose their mind).

Mr Vaghela was apparently mouting pressure on the Congress to replace the current Gujarat state unit chief Bharat Sinh Solanki and project him as its chief ministerial candidate. The party had refused to do so. Congress spokesman Mr Randeep Surjewala while confirming Mr Vaghela’s attempts to replace the state unit chief, said, “A party is always bigger than individuals.”

Speaking at a celebration to mark his 77th birthday, Mr Vaghela alleged that there was a “conspiracy” to remove him from the Congress. While speculation was rife that Mr Vaghela was inching closer to the BJP, he claimed that he would “not join any political Party, but work for the people of Gujarat”. He then added; “Today, I free myself from Congress and I set Congress free.”

There are rumours in the state that Mr Vagehla  has been holding parlyes with NCP, JD(U) and Hardik Patel to take on the BJP in the state. The alliance, Mr Vaghela’s camp Felt, could project him as the CM face.

While the party continued to put up a brave front, sources said that Mr Vaghela’s move to quit the Congress could hit the party hard in Gujarat, which would heading for Assembly polls in December. The Congress strategists were working on a plan to join hands with Hardik Patel’s Patidar Anamat Andolan Samity had felt that Mr Vagehla being a Kshatriya would pool in his caste votes. Things worsened for Congress in the state as of its 57 MLAs, eight had voted in favour of Mr Kovind in the Presidential polls. As for the artihmetic, Mr Vaghela, who is an MLA himself has the support of only two more legislatures, which included his son.

In a related drama in the Congress, general secretary in-charge of Himachal Pradesh, Jammu and Kashmir and Uttarakhand Ambika Soni, who reportedly had asked the party high command to “reduce” her responsibilities told the media there that there “is no question of resigning”. Ms Soni claimed that she herself had told the party high command to “lighten” her duties “for health reasons”.

However, sources revealed that Ms Soni was apparently “upset” following reports that former home minister Sushil Kumar Shinde was set to replace her as Himachal Pradesh in-charge. Referring to Himachal Pradesh, Ms Soni claimed that she had told the party leadership last year that “it would be difficult” for her to criss-cross hill states due to her health.