Thakur, who was recently nominated by the BJP to contest against the Congress' Digvijay Singh, is out on bail in the Malegaon blast case. 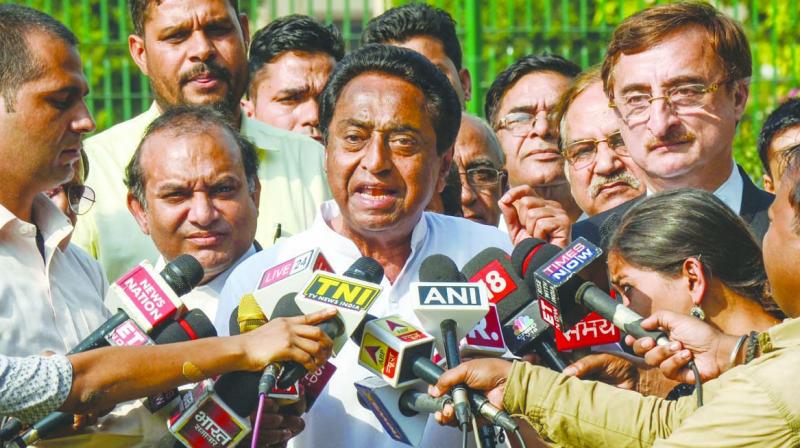 'BJP has been invoking nationalistic issues during the election season to divert people's attention from its failures,' Nath said. (Photo: File)

Chhindwara:The BJP's Bhopal candidate Pragya Singh Thakur has no record of political or public service and was nominated just to create a communal divide, the “only card” left with the party, says Madhya Pradesh Chief Minister and veteran Congress leader Kamal Nath.

The Bharatiya Janata Party has been invoking nationalistic issues during the election season to divert people's attention from its failures, Nath said.

"… basically the BJP is trying to create a communal divide because that's the only card they have left.  But what the BJP does not realise is that the people of the country are intelligent enough to know that this communal card is for political purposes,” he told PTI in an interview.

Thakur, who was recently nominated by the BJP to contest against the Congress' Digvijay Singh, is out on bail in the Malegaon blast case of 2008.

She is under fire for saying Maharashtra Anti-Terrorism Squad chief Hemant Karkare died during the 26/11 terror attacks because she cursed him for "torturing" her in custody when he probed the Malegaon blast.

She retracted the statement after it drew severe criticism. Hitting out at Thakur, Nath said, "They could not find any other candidate." "Pragya Thakur joined the BJP a day before (her nomination as BJP's Bhopal LS seat candidate) and she has no record of any political or public service and they put her there. Isn't it obvious why they put her there?"

The chief minister added that the party in power at the centre is taking the help of issues related to nationalism because it is unable to explain to the people what it has done.

"They cannot talk about jobs, they cannot talk about farmers, small traders, so they had to divert people's attention to some other issues," he said. Discussing state of affairs in his state Madhya Pradesh, the chief minister said he is putting things in order, including in the bureaucracy.

Asked if the recent state police FIR into alleged irregularities in the e-tendering scheme in the state was aimed at top leaders of the previous BJP government led by Shivraj Singh Chouhan, Nath said he is only pursuing the truth.

Nath, 72, rubbished the opposition's charge that mass transfers of government officials in the state are being done with a motivated mind. "There is no question of a mafia working. They (BJP) are upset because of transfers. They had tried to politicise the bureaucracy.

After 50 days in power, it was my duty to ensure that those capable officers who were sidelined by the BJP were placed in positions which they were not in before.

"The officers who were working politically for the BJP or siding with the BJP, I had to shift them out. They have been there and working for the BJP government outside their line of duty. I don't understand why Mr Shivraj Singh gets a stomach ache when some officers are transferred," the chief minister said.

In a rally in the Budhni assembly seat before the assembly polls in 2018, Nath warned his wrath would fall on people who were doing wrong or siding with a particular political dispensation.

Questioned on his statement, Nath said, "I have no anger, I have no wrath. I will be pursuing the truth." The chief minister also said he is committed to ensuring that all loans of eligible farmers are given as promised by the Congress before the assembly elections.

"Those farmers whose loans have been written off are on record and I can give you a pen drive with their names, telephone numbers and addresses (to verify). "As the model code of conduct came in.. there is a delay in that. I have only had 75 days in office," he said.

According to Nath, he had earlier said in a rally that about 22 lakh farmers of the state benefitted from the loan waiver promise while another about 38 lakh will be accorded the benefit in the coming days.

"I am saying we have taken a decision to waive off the loan of all the farmers. We have done so for so many. It's all on record. The rest will also be done soon," he said. Asked about his priorities for the state, the Congress veteran said all of Madhya Pradesh is his focus area.

"I have given the flavour of Congress policies and the Congress' vision whether it is farmers loan, electricity, pension to the people. I have done that in 75 days. It is reaching everyone," he said.