Venkanna said he was offered prayers with his family members. 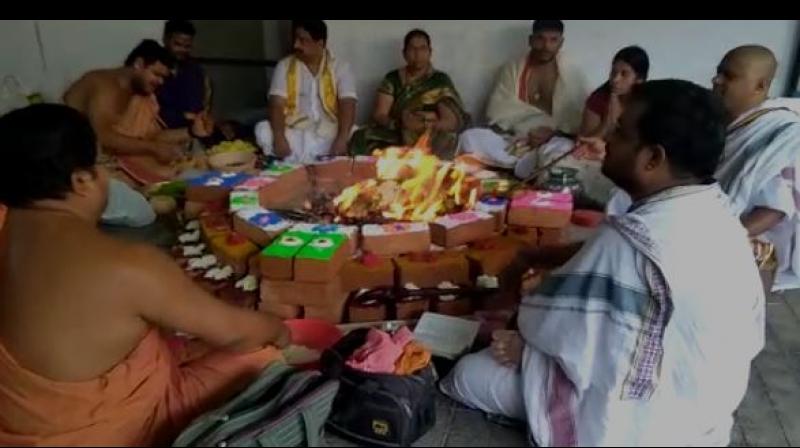 Venkanna, said he conducted a pooja and offered prayers to the Goddess Kali for a win of the Andhra Pradesh Chief Minister N Chandrababu Naidu. (Photo: ANI)

Venkanna, said he conducted a pooja and offered prayers to the Goddess Kali for a win of the Andhra Pradesh Chief Minister N Chandrababu Naidu. Venkanna said he was offered prayers with his family members.

Venkanna said: "Chandrababu Naidu is a visionary leader. I wish he serves for the state for a longer time. I performed the pooja as some evil forces are coming together against Naidu as they are incapable of fighting and winning simultaneous Lok Sabha and Assembly polls. In order to prevent such evil forces, we performed this pooja today."

Telugu Desam Party (TDP) on Tuesday released its final list of 25 candidates for Andhra Pradesh for the ensuing Lok Sabha elections and the third list of 36 candidates for the state Assembly polls. Chief Minister Chandrababu Naidu-led party has finalised its candidates for both state and national polls.

There are 25 Lok Sabha and175 Assembly seats in Andhra Pradesh.

Andhra Pradesh will go to polls in a single phase on April 11. The Lok Sabha and legislative assembly polls will be held in the state simultaneously on this day. The results will be announced on May 23.

BMC chief rules out any further lockdown in Mumbai, says situation on the verge of control