Stalin was arrested after his protest, and an FIR was lodged against him and other party MLAs for unlawful assembly. 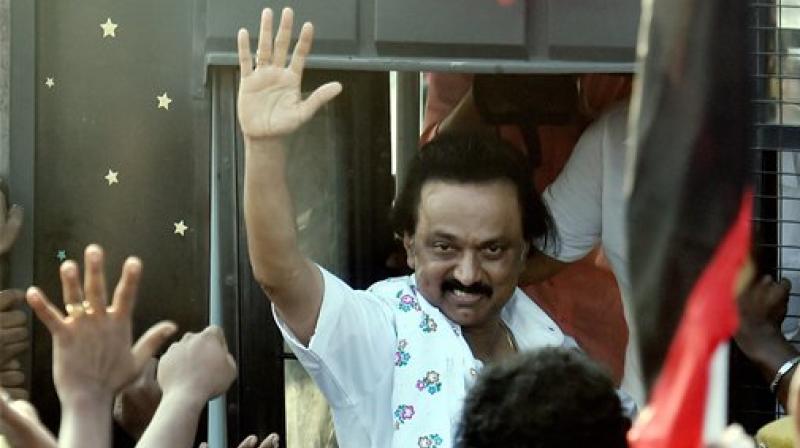 Tiruchirappalli: DMK leaders, accompanied by party working president MK Stalin, went on a statewide hunger strike in Tamil Nadu on Wednesday to protest the ruckus in the state Assembly on Saturday during the Palanisamy trust vote.

Stalin had on Sunday announced that the DMK would hold a hunger strike across Tamil Nadu on Wednesday.

On Sunday, Stalin sat on a hunger strike at Marina beach accompanied by party MPs and MLAs, after the Assembly session saw Tamil Nadu Chief Minister Edappadi Palanisamy winning the vote of confidence 122-11. The DMK working president’s reason for the hunger strike was that he and his MLAs had been manhandled in the Assembly.

DMK had been evicted from the Assembly after a fight broke out, with MLAs breaking chairs and Speaker P Dhanapal’s shirt being torn.

However, Stalin was arrested after his protest, and an FIR was lodged against him and other party MLAs for unlawful assembly and violation of public order.

"DMK staged the protest without obtaining prior permission as required under law", a senior police official had said.

But several DMK workers also indulged in stone pelting and blocked traffic in many parts of the state.

Meanwhile, on Tuesday, the Tamil Nadu Congress extended its support to DMK for the statewide hunger strike.

The Congress, an ally of DMK, had walked out of the Tamil Nadu Assembly before the trust vote, which was conducted by open ballot - against the wishes of Stalin, Congress and former Chief Minister O Panneerselvam.