Mulayam gave the event a miss despite SP leader Azam Khan rushing to the SP patriarch's bungalow to bring him to the event. 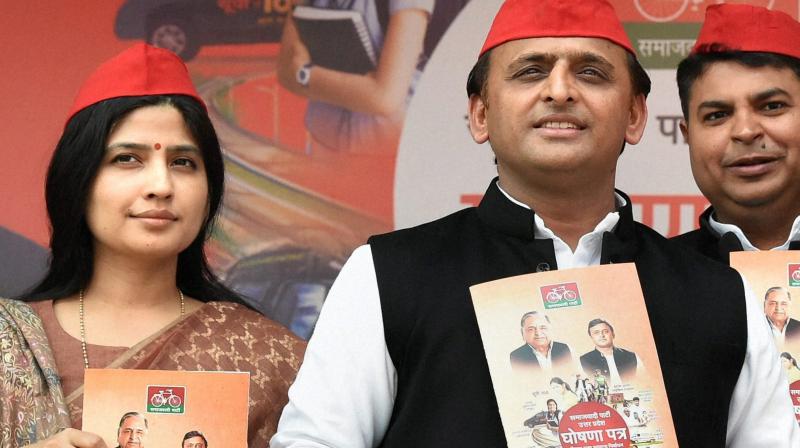 Senior party leaders and Dimple Yadav, MP and wife of the chief minister, were present on the occasion were present. (Photo: PTI)

Lucknow: The ruling Samajwadi Party in Uttar Pradesh on Sunday released its manifesto for UP Assembly elections promising a bunch of schemes for all round development of the state at a function which SP patron Mulayam Singh Yadav and his brother Shivpal gave a miss.

With an eye on development, Akhilesh riding on the crest of "kaam bolta hai" (work speaks) slogan, announced schemes which prioritise development of the state.

He said the model villages in the name of Janeshwar Mishra would be a tribute to the Samajwadi leader on his death anniversary on Sunday.

The Chief Minister, in his new role as the Samajwadi Party national president, directed all candidates to prepare a road map for development of their respective Assembly constituencies.

A highlight of the manifesto was Samajwadi Kisan Kosh for farmers to purchase seeds and fertilisers, perhaps to match the Pradhan Mantri Kisan Bima Yojana.

As Mulayam and Shivpal, the warring uncle of Akhilesh, were conspicuous by their absence, senior SP leader Azam Khan rushed to the SP patriarch's bungalow to bring him to the event. But even then Mulayam did not grace the occasion where senior party leaders and Dimple Yadav, MP and wife of the chief minister were present.

In an impassioned appeal to the electorate to vote SP back to power, Akhilesh said, "We got support on 2012 manifesto, we also fulfilled promises made in it."

"The manifesto is a 'sankalp' (promise) to form future government. It's clear that we all want to form Samajwadi Party government. If you work for 5 years, you will get government of five years," he said.

The chief minister asked party workers to go to the masses and make them aware of the schemes implemented by his government during the past five years.

"A lot of work has been done in a big way. We have to work more in future. I tried for the past five years not to leave path of socialism and also ensure balanced development to improve rural economics," he said.

Earlier on Sunday, the Samajwadi Party and the Congress finalised their alliance after days of uncertainty, with the latter getting 105 seats to contest the elections.