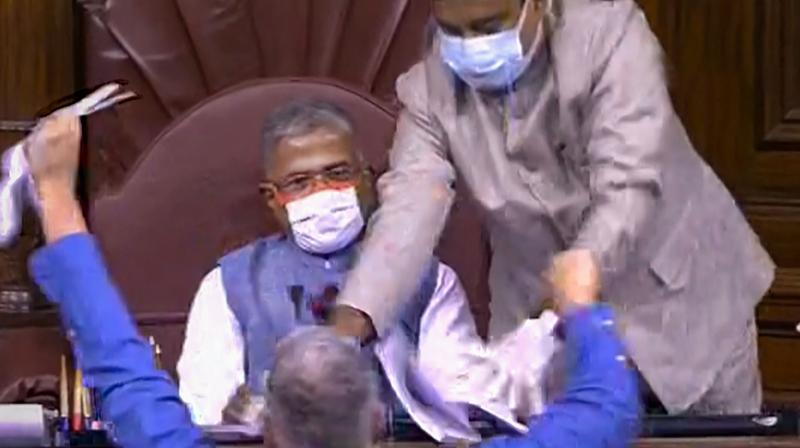 New Delhi: Rajya Sabha was on Monday adjourned for the day amid uproar by opposition members over suspension of eight MPs, including TMC leader Derek O'Brien and Sanjay Singh of AAP, for the remaining part of the Monsoon session over their "unruly behaviour" during the passage of farm bills.

The proceedings of the House were almost washed out as it could not take up any legislative business.

Earlier in the day some members managed to raise issues during Zero Hour.

The House witnessed five adjournments as the some opposition members continued protests over suspension of members.

As soon as the House resumed at 12 pm, Bhubaneswar Kalita, who was in the chair, asked the suspended members to leave the House and urged members to maintain decorum.

However, the opposition members refused to budge forcing the Chair to adjourn the House for the day.

Earlier in the day, Chairman M Venkaiah Naidu termed the behaviour of members during the passage of the bills on Sunday as "very unfortunate, unacceptable and condemnable" and one that has "tarnished" the image of Parliament, particularly the House of Elders.