O Panneerselvam will be the convener of AIADMK, Chief Minister E Palaniswami announced. 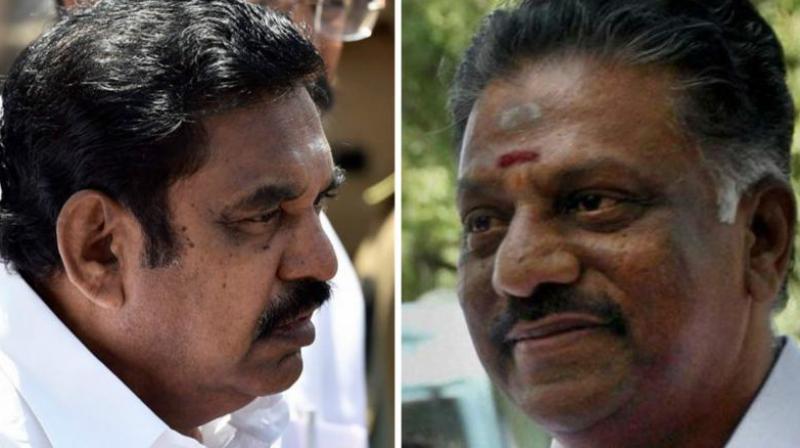 Chennai: Minutes after Tamil Nadu Chief Minister Edappadi K Palanisamy on Monday sealed the deal for the merger of the two factions of AIADMK, O Panneerselvam took oath as the deputy chief minister.

Soon after the announcement of the merger Chief Minister Palanisamy and Panneerselvam, along with other members of AIADMK have paid their tributes at Jayalalithaa's memorial at Marina Beach.

Panneerselvam will be given the portfolio of finance ministry and the position of deputy chief minister. He will be sworn in at 4.30 pm on Monday.

“Our first priority will be to retrieve the two leaves symbol. We will fulfill all the promises made by Amma,” Palanisamy said.

Soon after the announcement of merger Panneerselvam said, "Amma's blessings and wishes of party cadres made it possible."

Panneerselvam thanked Chief Minister Palanisamy and leaders of his faction.

“Had few difficulties in recent times, similar to what happened after MGR's demise, but both OPS & EPS came forward to unite party,” Munusamy said.

There was no mention of jailed AIADMK general secretary VK Sasikala in the press statement.

Panneerselvam said that the decision on expulsion of VK Sasikala will be decided after party's general body meeting.

The merger comes after the recent meeting of both Palanisamy and Panneerselvam with Prime Minister Narendra Modi in Delhi. Both EPS and OPS had met Modi separately in the national capital.

The crucial meeting for the merger of the two factions of All India Anna Dravida Munnetra Kazhagam (AIADMK) took place at the party headquarters in Chennai.

Palanisamy, who had earlier cancelled his scheduled visit to AIADMK head office, met Panneerselvam at the party head office on Monday afternoon.

Earlier on Monday, 17 AIADMK MLAs, the supporters of TTV Dhinakaran, had reached his Besant Nagar residence for a meeting, according to ANI.