She was addressing a virtual rally of the TMC on 'Martyrs' Day'. 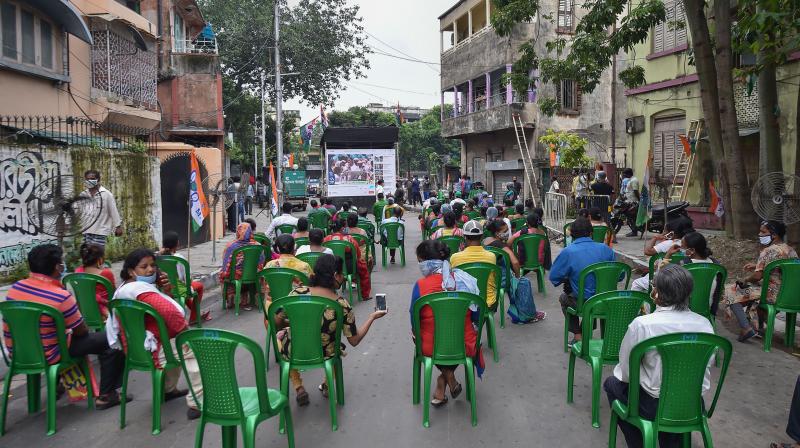 Addressing a virtual rally of the TMC on 'Martyrs' Day', she declared West Bengal will continue to be run by its own people and not "outsiders", an apparent reference to challenger BJP.

Banerjee alleged the Centre has deprived Bengal of resources, and asserted people will give a befitting reply to it for the injustice done to the state.

"A conspiracy is being hatched by the union government to destabilise the elected government of Bengal by using central agencies and money power. The BJP is the most destructive party the country has ever seen.

"When the country is busy fighting the COVID pandemic, the BJP is busy destabilising the elected governments in Rajasthan and West Bengal after Madhya Pradesh," she said.

"Why should Gujarat rule all states? What's the need for a federal structure? Create 'one nation-one party system' then," the TMC supremo said, as she mounted a scathing attack on the Centre over the political turmoil in Rajasthan while referring to Prime Minister Narendra Modi's Gujarati origin.

She also alleged that a "reign of fear" was prevailing across the nation.

The TMC leader asked people to vote her party to power in the assembly elections due next year.

"People of Bengal will rule the state and not outsiders and people from Gujarat. We should strive to ensure that security deposits of all the BJP candidates are forfeited," she said.

The TMC holds a 'Martyrs' Day' rally on July 21 every year to commemorate the death of 13 people in police firing during a protest led by Banerjee against the then Left Front government in 1993. It was held virtually for the first time due to restrictions imposed to stem the spread of COVID-19.