Rajnath Singh says, 'will ensure no harm comes to pride, honour of jawans'

During his Kargil visit, he was given a detailed presentation on Operation Vijay, the Defence Minister said. 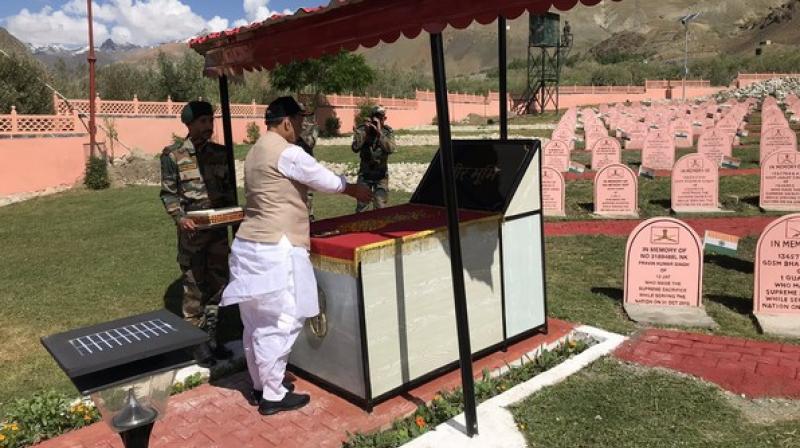 Lauding the heroes of the Kargil war, Defence Minister Rajnath Singh on Sunday said he will do his best to ensure that no harm comes to the pride and honour of the soldiers. (Photo: ANI)

New Delhi: Lauding the heroes of the Kargil war, Defence Minister Rajnath Singh on Sunday said he will do his best to ensure that no harm comes to the pride and honour of the soldiers.

Addressing a gathering of war veterans, Kargil war widows and others at an event held here to commemorate 20 years of Operation Vijay, Singh said, "Whatever we can do to honour our martyrs is less. We honour them and salute the war widows present here. We feel proud of our soldiers." He also shared his experiences of visiting Drass on Saturday, where he paid homage to fallen soldiers at the Kargil War Memorial.

"I can only say this from my side that I will do my best and whatever is possible to ensure that no harm comes to the honour, pride and esteem of our jawans," the Defence Minister said to a thunderous applause.

He also said a man could compromise with other things, but not with his pride and honour. "That pride ('swabhiman') could be personal, social or nationalistic ('rashtriya swabhiman'). It was with this sense of pride that 18-year-olds and 20-year-olds had embraced the gallows during the freedom struggle," Singh said.

During his Kargil visit, he was given a detailed presentation on Operation Vijay, the Defence Minister said. Operation Vijay was the name given to India's limited war against Pakistan after the neighbouring country infiltrated in 1999. "I was told about the extraordinary valour and indomitable and fearless spirit of our soldiers, who climbed high-altitude peaks despite knowing that they could be shot from the above by the enemy. And they eventually got the victory for us in Kargil," Singh said.

The Defence Minister also felicitated the war widows present on the occasion, including those who lost their husbands in the Kargil conflict or in any attack this year. The programme was organised by Veterans India at a packed NCC Auditorium in the Delhi Cantonment.