Govt's duty to stand with victims: Priyanka welcomes UP CM's visit to Sonbhadra

The state government has already distributed checks of Rs 5 lakh as ex-gratia to the kin of the deceased. 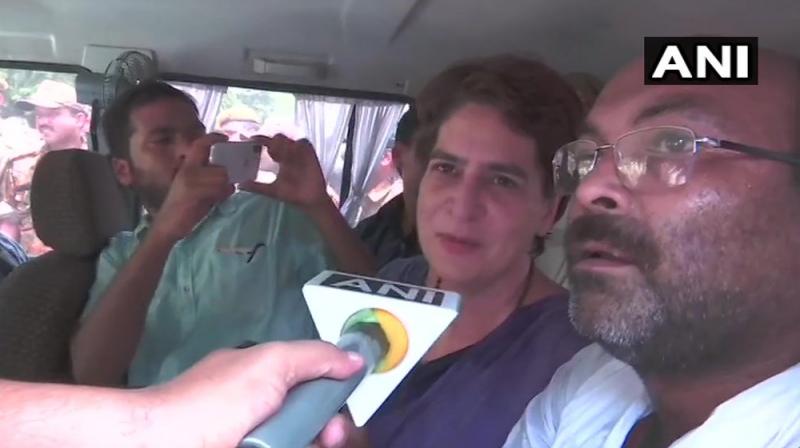 "I welcome the honourable UP chief minister's visit to Sonbhadra. Though it is late, it is the duty of the government to stand with the victims. It is good to know your duty. Ubbha has been waiting for justice for a long time. It is expected that the victims of Ubbha will get justice and their five demands will be fulfilled," the Congress leader tweeted.

Priyanka, however, did not clarify the five demands she was referring to.

Accompanied by state BJP chief Swatantra Dev Singh, Chief Minister Yogi Adityanath met the family members of the firing victims and handed over a check of Rs 50,000 each to those injured in the incident.

The state government has already distributed checks of Rs 5 lakh as ex-gratia to the kin of the deceased.

Priyanka Gandhi, who met the victim families after a high voltage political drama, also announced Rs 10 lakh to each of the families who lost their near ones' in the firing allegedly by the village headman and his associates on July 17.

Priyanka's visit had upped the temperature of the state politics after she was stopped to visit the bereaved families and was put in detention in a guest house in the adjacent Mirzapur district.

Earlier in the day, some of the victims demanded that the government provide them with land and money, along with death sentence to the perpetrators of the crime.

Ten people including women were killed, while over 20 sustained injuries when a village headman and his associates allegedly opened fire at a group of people over a land dispute at Ubbha village in Sonbhadra district of Uttar Pradesh on July 17. The incident took place when the village headman went to take possession of his land purchased two years ago.

Twenty-nine people have been arrested and four officials have been suspended in connection with the incident.