Vaghela wanted to be the Congress’ chief ministerial candidate in coming Assembly polls. 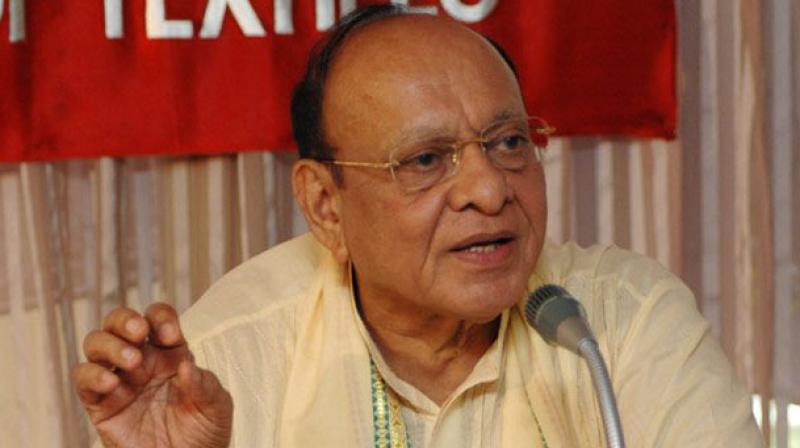 Vaghela made the announcement at a public meeting of his supporters held in Gandhinagar on his 77th birthday. (Photo: PTI/File)

Gandhinagar/New Delhi: In a body blow to the Congress in Gujarat, one of its tallest leaders Shankarsinh Vaghela, on Friday announced he was quitting the party which had
taken "supari" (contract) from BJP to facilitate the latter's victory in the Assembly elections.

The dramatic announcement By Vaghela, a former RSS volunteer, came at an event organised to celebrate his 77th birthday, a day after the disunity in the state Congress came out in the open when it transpired at least eight of its 57 MLAs had not voted for the joint opposition's presidential Meira Kumar.

Vaghela, currently the leader of the opposition in the Assembly, had quit BJP over 20 years ago and formed Rashtriya Janata Party. He headed the RJP government in 1996 before merging his party with Congress.

The Kshatriya strongman, whom his supporters fondly address as 'Bapu', said he would not join the BJP or any other party. He, however, said he was not going to retire from
politics, triggering speculation he may float his own party and then cobble together an anti-Congress, anti-BJP front.

"Today, I free myself from Congress and I set Congress free," he said.

Vaghela's decision to quit the Congress months ahead of the election likely in November-December, would be a cause of concern for the party, which has been out of power in the state, once dubbed the BJP's laboratory for testing its hardline Hindutva, for close to two decades now. He enjoys considerable support in North Gujarat.

It would, however, draw some comfort from the fact that only two Congress MLAs, including his son Mahendrasinh Vaghela, attended the event.

Before announcing his resignation, Vaghela said," The Congress expelled me 24 hours ago, even before I made the announcement. In the face of destruction, they lost their
mind."

The Congress party, however, maintained it had not expelled Vaghela or initiated disciplinary action against him.

"Neither has Congress taken any disciplinary action against him nor has he been expelled from the party. Both these claims are entirely incorrect," Congress chief spokesperson Randeep Surjewala said in New Delhi.

Surjewala said the party respected Vaghela which was reflected in him being given important responsibilities and positions. He hoped Vaghela would continue to work for the party despite quitting his posts.

"Vaghela wanted that present PCC president (Bharatsinh Solanki) should be replaced and he be appointed in his place. This is a decision of the party and its leadership and no individual can decide it. Party is bigger than individuals. Each one of us needs to understand that interests of the party and its ideals are bigger than the ambition of one person. We sincerely hope that he will continue to work for the party despite his decision to quit party posts," the Congress leader said.

Vaghela, after announcing his decision to resign, claimed some Congress leaders had issued a "diktat" to partymen to not attend his birthday celebrations.

"I am not going to join BJP. I will not join any political party," Vaghela, who has had a long association with Prime Minister Narendra Modi during the RSS days, said.

He said he will send in his resignation from the post of the leader of opposition to Congress president Sonia Gandhi on Friday.

"I have taken this sad decision after giving it considerable thought. But I was left with no option as when I told them (state Congress leaders) to do homework to take on the BJP in the coming elections, they got together to push me out of the party," he said.

Asserting that he was not a "bonded labourer", Vaghela alleged,"You (the Congress) have taken 'supari' (contract) from the BJP to allow that party to win Gujarat. You don't
fight the BJP and won't allow those who do to fight them."

The former Gujarat chief minister and Union minister in the UPA government was at loggerheads with the Congress leadership for quite some time due to its reluctance to
declare him the party's chief ministerial face in the Assembly elections.

He was not attending the state Congress meetings for some time and even unfollowed Congress vice president Rahul Gandhi on microblogging website twitter to register his protest.