Vanquished Congress at crossroads in Odisha

The Grand Old Party which was the main Opposition party before the recent polls has lost the position to the BJP. 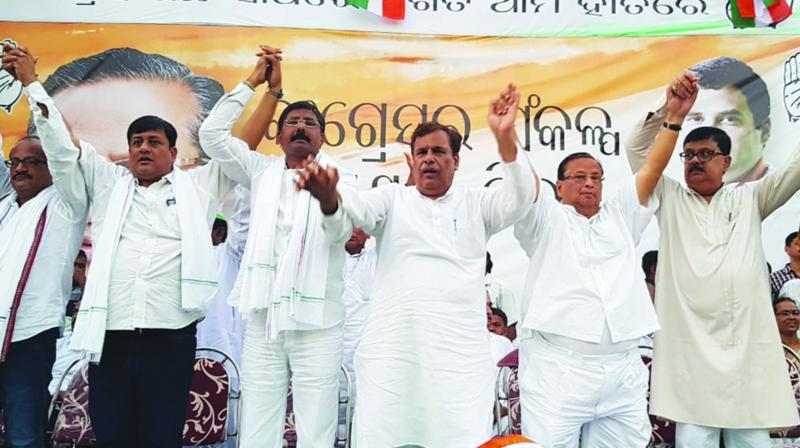 A file photo of top Congress leaders at a party meeting before the polls.

BHUBANESWAR: Reduced to just nine members in the 147-member Odisha Legislative Assembly, the Congress which ruled the state for more than four decades is now in utter quandary. The Grand Old Party which was the main Opposition party before the recent polls has lost the position to the BJP.

With all top leaders, including Pradesh Congress president Niranjan Patnaik, two working presidents — Chiranjibi Biswal and Pradeep Majhi — and campaign committee chairperson Bhakta Charan Das losing the elections, the party now desperately needs inspiring leadership to instill new spirit and zeal among the cadre to rise from the ashes and rebuild the organisation.

The reasons of the catastrophe the Congress encountered in Odisha were better summed up by party’s veteran leader and former Union minister Kanhu Charan Lenka.

Mr Lenka who in the past led the Congress to power in the state, indirectly blamed the party’s top leaders, including PCC chief Niranjan Patnaik, former chief minister Hemanananda Biswal, former Leader of the Opposition Narasingha Mishra and campaign committee chairperson Bhakta Charan Das for the party’s debacle.

He observed that as these leaders fielded their children in the polls ignoring senior leaders of the party and claims of many other leaders who gave their sweat and blood working for the people at the grassroots, the party was rejected by the people.

“More than 50 per cent of our candidates forfeited their deposits because many of them did not come from Congress background and were completely new faces. What is worse is that most of the youth candidates were businessmen who were given tickets for reasons best known to the PCC leadership. In several constituencies, the Congress candidates were asked to remain inactive as there was a deal between the top leaders of the party and BJD leaders to help the latter,” said Mr Lenka.

In 2019 Assembly elections, the Congress strength in the Assembly got reduced to nine only, seven less than the 2014 elections. Its vote share this time dropped to 13.4 per cent from 25.6 per cent in 2019.

In Lok Sabha elections, though the Congress won one seat this time as against nil in 2014, its vote share drastically dropped to 16.1 per cent from 25.7 per cent in 2014.

Despite the party receiving serious drubbing in the twin polls, neither the party’s Odisha in-charge Jitendra Singh nor any other central leaders have reviewed the reasons of the debacle.

As the party fights leadership crisis at the national level following incumbent president Rahul Gandhi’s insistence to step down from his position, the Odisha chapter also faces similar situation with the PCC chief Niranjan Patnaik announcing to relinquish his post owning moral responsibility for the party’s poorest ever show. Bhakta Charan Das, the campaign committee chairperson who along with son lost the elections, has also resigned from his post.