2 out of 4 TDP MPs who joined BJP are under probe by IT, ED, CBI 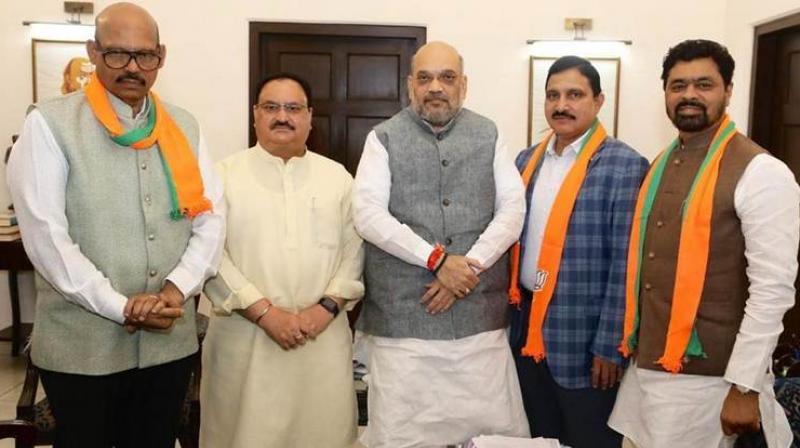 New Delhi: Out of the four Telugu Desam Party’s (TDP) Rajya Sabha members who defected to the Bharatiya Janata Party, two are under the scanner of Income Tax, Enforcement Directorate and Central Bureau of Investigation reported The Indian Express.

While Y S Chowdary has been under the watch of CBI and ED in alleged bank fraud, C M Ramesh’s name was popped up during the tussle in between the then CBI Director Alok Verma and Special Director Rakesh Asthana.

Also, a company linked to Ramesh has been investigated by the Income Tax department. Both the members have their private businesses.

“I’ve complained to Ethics Committee to seek disqualification of two TDP MPs, Y.S. Choudary & C.M.Ramesh who have earned the dubious title of “Andhra Mallyas” with massive financial scandals…,” Rao had posted the letter which he had written to the Chairman of Ethics committee on his Twitter account.

Income Tax department had conducted searches at the company’s premises in Hyderabad and Ramesh’s residence in Kadapa. The TDP had hit out at the ruling BJP calling the action political vendetta.

Income Tax department found suspicious transactions worth Rs 100 crore in Rithwik Projects Pvt. Ltd., a company associated with Ramesh. The department had allegedly transferred Rs 74 crore through untraceable transactions and bills amounting to Rs 25 crore were found to be “dubious”.

Chowdary was Minister of State at the centre before TDP pulled out of the coalition and is being investigated by the CBI in three cases. There is a set of three FIRs which alleges that electrical equipment manufacturer Best and Crompton Engineering Projects Limited (BCEPL), which the investigating agency claims is linked to Chowdary, fraudulently obtained loans of over Rs 360 crore from banks. The company couldn't pay off these loans.

The ED, based on the FIRs, attached assets over Rs 315 crore. These assets include high-end cars.

“Searches resulted in the recovery and seizure of 126 Rubber Stamps of various shell companies from the business premises at Plot No.18, Nagarjuna Hills, Punjagutta, Hyderabad-500082. It was also identified that the above business premises have accommodated many companies of Sujana Group,” The Indian Express quoted ED.

ED said that the verification of documents seized indicated that BCEPL was functioning under the “Chairmanship of Shri Y.S. Chowdary alias Sujana Chowdary, who is a sitting Member of Parliament-Rajya Sabha.”

Chowdary and Ramesh have denied the allegations.