India   Politics  21 Apr 2019  People of Bengal will pay back 'notebandi' with 'votebandi': Mamata hits out at Modi
India, Politics

People of Bengal will pay back 'notebandi' with 'votebandi': Mamata hits out at Modi

Taking potshots at Modi, Banerjee claimed that the people did not want BJP to return power at the Centre. 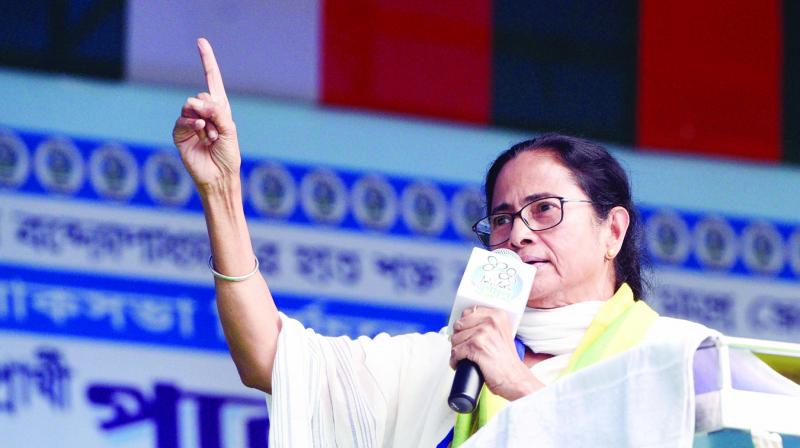 Mamata Banerjee in a rally at West Bengal alleged that BJP was indulging in violence and urged the people to not vote for the party in the ongoing Lok Sabha polls. (Photo: File)

Nadia: Raking up the issue of demonetisation, West Bengal Chief Minister Mamata Banerjee on Sunday accused Prime Minister Narendra Modi of causing hardships to the people through note ban and said the electorate in the state will pay back by not casting a "single vote" for him.

"In the (2014) elections, Narendra Modi's BJP party had won. But, in the last five years, the government has betrayed Bengal. He (Modi) is coming here and saying lies. He comes flying to Bengal at the time of elections and is nowhere to be seen in other times," she said at a public rally in Gayeshpur in Nadia district.

Attacking Modi over demonetisation, the TMC supremo said, "Early morning, we all found Rs 500 and Rs 1,000 notes had been banned. Farmers and common people were greatly inconvenienced. You (Modi) did 'notebandi', but the people of Bengal will pay you back with 'votebandi'. You will not get a single vote."

Continuing her tirade against the Prime Minister, Banerjee remarked, "He (Modi) does not have any connection with Bengal. He does not like Bengal. He cannot recognise the people here. He hates everything in Bengal."

Banerjee alleged that BJP was indulging in violence and urged the people to not vote for the party in the ongoing Lok Sabha polls.

Highlighting the initiatives taken by the TMC government, she said, "We have come up with programmes for the betterment of the people, from lower class to middle class. We have started a special recruitment drive for Scheduled Castes and Scheduled Tribes. We are giving loans of Rs 10 lakh to those studying here and Rs 20 lakh to for higher education abroad."

"We are also giving scholarships to those in the general category, which they did not get earlier. We are providing medical treatment free of cost to the poor and disadvantaged groups," she added.

Taking potshots at Modi, Banerjee claimed that the people did not want BJP to return power at the Centre.

"People do not want this (BJP) government in Delhi. Modi babu only says lies. He has been giving big speeches in the last five years. He is sharing his 'mann ki baat'. How big is his 'mann' (mind)?" He has been making foreign tours in the last four-and-half years and now he is promoting himself."

On Saturday, Modi had come down heavily on Banerjee for demanding proof of the Balakot air strikes and slammed her for not doing enough to uplift the poor despite being in power.

Five Lok Sabha constituencies in West Bengal -- Jangipur, Balurghat, Maldaha Uttar, Maldaha Dakshin and Murshidabad -- will go to polls in the third phase of the general elections on April 23. The state had a total of 42 Lok Sabha seats. Counting of votes will take place on May 23.