Muslims don't vote for us, but we gave them sanctity: Ravi Shankar Prasad

The Union Minister was responding to a question related to development having an impact on culture and diversity. 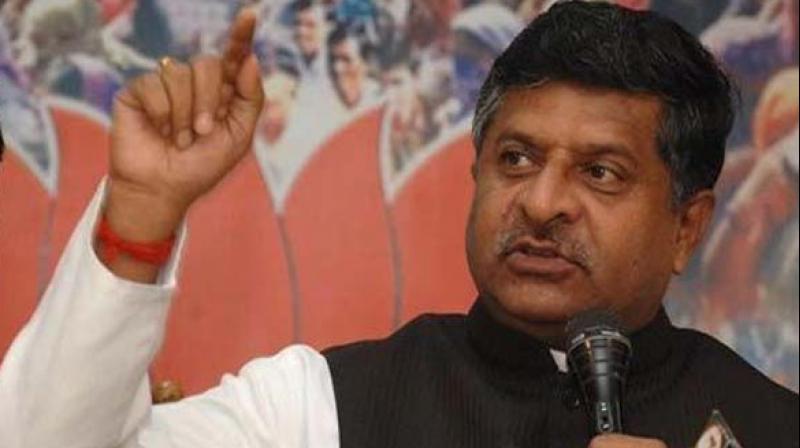 New Delhi: Union Minister Ravi Shankar Prasad on Friday said Muslims do not vote for the BJP, but the government has given them "proper sanctity".

"We have got 13 chief ministers of our own. We are ruling the country. Have we victimised any Muslim gentleman working in the industry or service? Have we dismissed them? We don't get Muslim votes. I acknowledge very clearly, but have we given them proper sanctity or not?" Prasad asked at the Mindmine Summit in New Delhi.

He was responding to a question related to development having an impact on culture and diversity.

"We salute diversity and culture of India. There are two ways of looking at it. Let me be very frank today. There has been campaign against us for a very long time, but today we are here because of blessings of people of India," Prasad said.

In recent Assembly elections, the BJP scored an impressive win in Uttar Pradesh and Uttarakhand. The party also formed government in Goa and Manipur. Its main rival Congress was able to get a clear majority in Punjab only.

As IT minister, Prasad said, he has visited many Muslim-dominated villages where many Muslim youth are running Common Service Centres which help people avail of government services through Internet.

Prasad said Haque has converted his motorcycle into an ambulance, rushes whosoever falls sick to hospital and in the process, has saved nearly 2,000 lives.

"We never saw religion of Haque or whether he voted for us or not. If there are certain uncalled for voices, the Prime Minister addresses the concerns, the CMs (chief ministers) address concerns. Yogi (Adityanath) is a popular leader.

You are seeing his instances of good governance and inclusive development," Prasad said.

The minister said he has issues with those in the Left and journalists spreading "hatred" against Modi.

"We have a problem with some of our friends. Mostly, the Leftist friends and journalists who entertain a pathological hatred against Narendra Modi. Good luck to them," Prasad quipped.

According to Prasad, the Left is "left out" all over the world and had been defeated in India.

"They are left out in Bengal, are surviving in Kerala and Tripura, but the Left has got a very good campus in Delhi, which is the JNU (Jawaharlal Nehru University) and I always say the Left also needs some consolation prize. So, JNU is their consolation prize, we don't mind that," Prasad said.

India is in the third phase of political evolution where people are looking for "politics of aspirational reality with good governance".

"People of India know they can unseat any political party howsoever popular any political leader howsoever popular. This realisation brings about a different kind of humility. You better learn to perform and trust people. Otherwise, they will show you the door and they have been showing the door," Prasad pointed out.

He is of the view that the politics of 'want' relating to breads and of 'identity' based on caste, community, religion and region is over now.