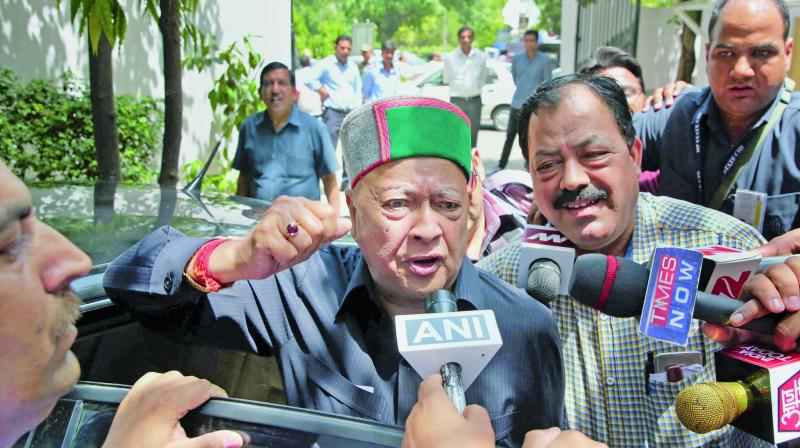 New Delhi: The Enforcement Directorate on Thursday questioned Himachal Pradesh chief minister Virbhadra Singh in connection with a money laundering case. ED had summoned Mr Singh to record his statement and confront him with some documents seized in connection with case.

Mr Singh had earlier informed ED as to why he had not appeared before it so far and sought a new date from ED following which he was summoned to appear on Thursday. While refusing to talk to media outside the ED officer where he reached around noon, raising his fist Mr Singh narrated a poem saying, “Sarfaroshi ki tamanna ab hamare dil mein hain, dekhna hai zor kitna baju-e-qaatil mein hai.”

Earlier on Wednesday, the investigating agency had refused to give an assurance to the Delhi high court that it would not arrest the CM when it appears before. This was in context of a plea filed by Mr Singh before the court seeking to quash the ongoing money laundering case against him.

The ED developments come a few days after CBI chargesheeted Mr Singh, his wife and some others in a case of disproportionate assets. The agency has already questioned Mr Singh’s wife, Pratibha and his son Vikramaditya.

The ED had filed this money laundering case while taking cognisance of a complaint filed by the CBI in this connection in September 2015. ED is examining allegations if Mr Singh and his family members amassed assets disproportionate to their known source of income between while Mr Singh was a Union Minister between 2009 and 2011.

In its chargesheet CBI had claimed that the CM had amassed assets worth around Rs 10 crore which were disproportionate to the tune of 192 per cent of his total income while he was as a Union minister.