Speculation is rife that the two leaders discussed modalities for a united fight against the BJP-led NDA during the 2019 general elections. 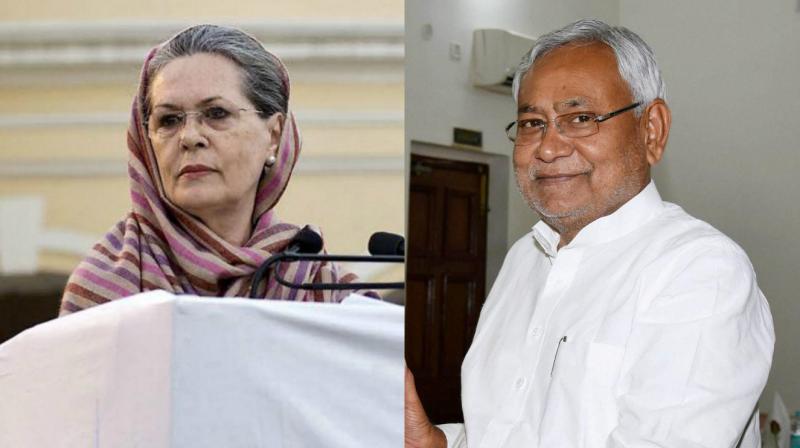 New Delhi: JD(U) chief and Bihar chief minister Nitish Kumar called on Congress president Sonia Gandhi at her 10 Janpath residence here on Thursday, a move that comes amid the Opposition’s effort to come together and take on Prime Minister Narendra Modi’s saffron juggernaut.

Speculation is rife that the two leaders discussed modalities for a united fight against the BJP-led NDA during the 2019 general elections. They also reportedly talked about putting up a consensus candidate for the presidential election. President Pranab Mukherjee’s term ends in July.

With TMC supremo and West Bengal CM Mamata Banerjee enmeshed in the Narada scam, AAP chief and Delhi CM Arvind Kejriwal facing an existential crisis after his party’s electoral setbacks and Mr Rahul Gandhi yet to prove his credentials as a vote catcher, Mr Kumar has emerged as a possible face for a united Opposition.

Sources said that Mr Kumar would need the support of the Congress to lead a united Opposition, as the outfit despite its electoral debacles retains nearly 20 per cent of the vote share across the country.

Mr Kumar, who was apparently keen to put up an Opposition candidate for the presidential election, has held parleys with the Left parties, BJD and NCP over the issues.

Ms Banerjee, who was in Odisha on Thursday met state CM Naveen Patnaik. During her visit to Bihar last year, she had criticised the JD(U) chief for supporting Mr Modi’s demonetisation move.

As for the presidential election, after the BJP’s stupendous victory in the UP polls, the party is all set to have its candidate elected. However, Mr Kumar wants an Opposition candidate for a “symbolic” fight, sources said.

“Mr Kumar met Ms Gandhi after an year. It was a courtesy call, but certain issues like the need for all Opposition parties to come together on a common platform before this year’s Gujarat polls and the 2019 general elections were discussed in a very positive manner,” JD-U spokesperson K.C. Tyagi told this newspaper.

Drumming up support for himself, Mr Kumar has already spoken to Hardik Patel-led front in Gujarat for a grand alliance to take on the BJP in the state, and has also evinced interest to join hands with the Congress.