The Twitter handle was then flooded with the ministers complimenting each other. 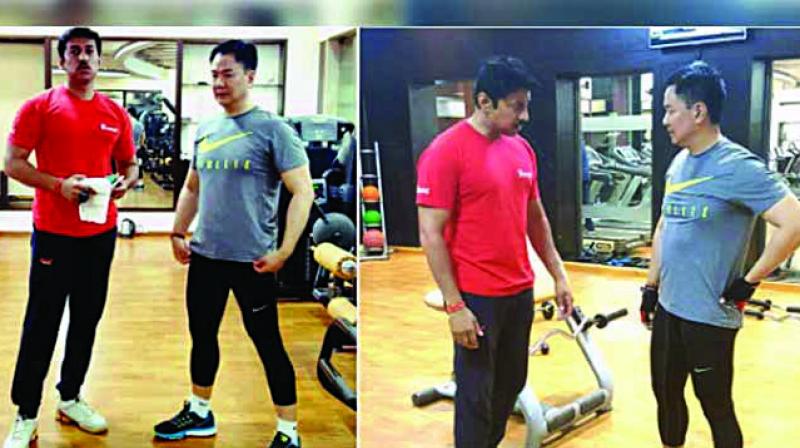 Rajyavardhan Singh Rathore and Kiren Rijiju at the gym.

New Delhi: Move over Yoga and the chants, the young turks of the BJP flexes muscles to the beats of Eye of Tiger from the cult fim Rocky in an ultra modern and hi-tech gym.

It was a clear departure from the saffron call for yoga as “insurance for health.” The ministers on Thursday posted a series of photographs on social media as they hit the gym to stay fit. If the former Olympian and Union minister, Mr Rathore, performed push ups by balancing himself on an exercise ball, his Cabinet colleague, Mr Rijiju, did some punishing stomach crunches. And they not merely enjoyed their gym session but were all over Twitter, complimenting each other.

Mr Rijjiju tweeted;  “While doing duty we’ve no time for physical fitness. But my Olympian colleague @Ra_THORe manages some time & gives me a tough challenge?? Mr Rathore, who highlights alphabets T-H-O-R resembling the name of an American suprehero from the Marvel comics  responded; “Ha ha ha...despite your hectic schedule, YOU are beyond competition”

Sports minister Vijay Goel jumped in to tweet;”Our very own Rocky Balboa ;). As Mr Rijiju puffed up his chest after his stomach crunches, had a word of advise for the generation next, “Young friends, stay away frm drugs, be fit. Let’s build @narendramodi ji’s #NewIndia dream. I took out 30 mins frm work 2 respond.” The railway minister, Suresh Prabhu, who perhaps practises yoga, at least on “International Yoga day” wished if he could be like Rijiju and Rathore. Mr Prabhu tweeted: “Getting intimidated by the huge commitment of @Ra_THORe & @KirenRijiju for fitness&rigorous regime they follow.Wish 1 could do bit like them.”

The Twitter handle was then flooded with the ministers complimenting each other. Mr Rathore responded to Mr Prabhu’s tweet, saying; “Sir @sureshpprabhu ji, we are happy and proud that YOU are keeping @RailMinIndia fit which is tougher anyday :)

Mr Rijiju joined saying; “I take it as a compliment from one of the finest human being.”