They were also seen consoling the members of the bereaved family. 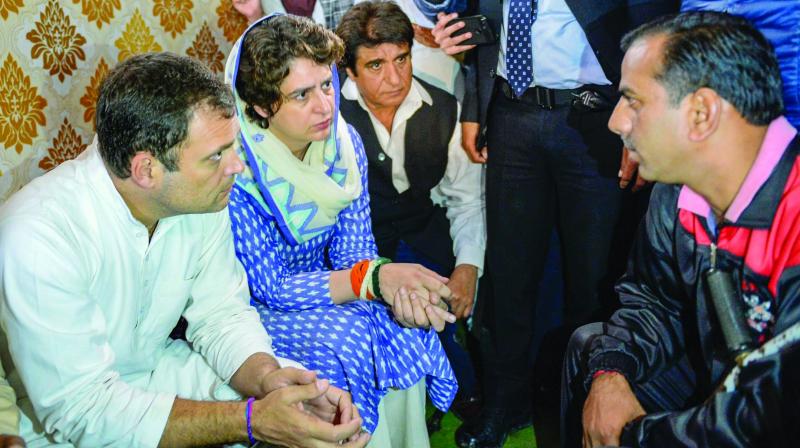 Congress president Rahul Gandhi, his sister and party general secretary Priyanka Gandhi Vadra and the party’s UP unit chief Raj Babbar meet the family members of the slain CRPF jawan Pradeep Kumar, who lost his life in the Pulwama terror attack, at his residence in Shamli, UP, on Wednesday. (Photo: PTI)

New Delhi: Sending across a subtle message of solidarity with the families of the martyrs of the Pulwama attack, Congress president Rahul Gandhi and general secretary in-charge of eastern Uttar Pradesh Priyanka Gandhi Vadra on Wednesday attended a prayer meeting in western Uttar Pradesh’s Shamli for CRPF jawan Amit Kumar Kori, who was killed in the attack.

Wednesday's visit though is just a precursor to around more such proposed visits by Mr Gandhi and Ms Vadra to families of martyrs in the coming days in Uttar Pradesh.

According to party sources, both the leaders are likely to visit families of the remaining Pulwama martyrs who belong to Uttar Pradesh between February 23 and 24, 2019 and offer their condolences to them.

They later also visited the family of another martyr from Shamli, constable Pradeep Kumar.

Out of the 40 CRPF personnel who were killed when a suicide bomber belonging to Pakistan-based terror organisation Jaish-e-Mohammad had rammed an explosives-laden SUV into a bus carrying them on February 14, 12 belonged to Uttar Pradesh alone.

On Wednesday, both Mr Gandhi and Ms Vadra paid tribute to the slain soldier Amit Kumar. They were also seen consoling the members of the bereaved family.

“In these moments of grief, we are with you... His (Kori's) father told us that he is sad, but at the same time proud (of his son). And I want to say that we are sad, but at the same time we are proud that a family of this country gave love to its son and educated him. The son gave his love, body and heart to the country. We can never forget this thing,” the Congress president said.

He further said, “my sister said that in a way our father (former Prime Minister Rajiv Gandhi) had also met the same fate. We understand your pain and agony. We are here to sit only for five minutes with you and to tell all of you that we want to share your grief."

The Congress president said India is a country of bravehearts and no power in the world can push it backwards. "From the bottom of our heart and on behalf of the country, I thank you, your son and the entire family," Mr Gandhi added.