PM Modi to address 2 rallies in Kerala on January 6, 27

Besides the PM, BJP national chief Amit Shah will address workers in Palakkad on December 31. 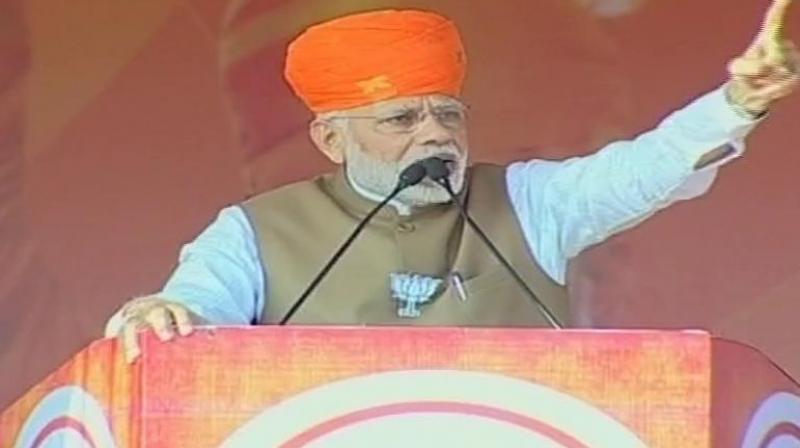 The two meetings to be addressed by PM Modi will also virtually turn out to be curtain raiser to BJP's campaigns for the coming Lok Sabha elections in Kerala. (Photo: File)

Thiruvananthapuram: Prime Minister Narendra Modi will address BJP workers at a public meeting in Pathanamthitta, the central Kerala district where the Sabarimala Lord Ayyappa Temple is located, on January 6.

He will again visit the state on January 27 to inaugurate a conference of the Bharatiya Janata Yuva Morcha, the youth wing of the saffron party, in Thrissur, BJP sources here said.

The selection of Pathanamthitta as the venue for the prime minister's public meeting assumes significance in the wake of the boiling Sabarimala women's entry issue and the continuing protest of the Bharatiya Janata Party (BJP) over it.

The two meetings to be addressed by PM Modi will also virtually turn out to be the curtain raiser to the BJP's campaigns for the coming Lok Sabha elections in the southern state.

PM Modi's visit is expected to give a boost to the BJP state leadership, which is facing intense criticism from various quarters for calling back-to-back hartals on the Sabarimala row.

The indefinite fast staged by the party leaders in front of the state Secretariat here, demanding the lifting of prohibitory orders and other restrictions at Sabarimala, is yet to create any desired impact.

In a recent interaction with party workers in the state, PM Modi, while referring to the Sabarimala issue, had told party workers to express their views firmly to convince people while following democratic and constitutional norms.

"The prime minister will take part in two programmes- one in Pathanamthitta and the second in Thrissur. The upcoming Lok Sabha poll is the focus. As Pathanamthitta happens to be the centre of activity of the Sabarimala pilgrimage, the meeting assumes great significance," he said.

Meanwhile, the state and core committee meetings of the BJP, held here Wednesday, had decided to continue their protest against the LDF government's stand to implement the Supreme Court verdict which permitted women of all age groups at the Ayyappa temple, and also against restrictions imposed there.

The Kerala BJP unit has been on an indefinite relay fast in front of the Secretariat here since December 3 over various demands, including withdrawal of prohibitory orders and reducing police restrictions at the hill-top shrine.

Senior party leader C K Padmanabhan, who was on an indefinite fast for nine days, was arrested on Wednesday and moved to the Medical College hospital in the city after his health deteriorated.

BJP state general secretary Shobha Surendran took over the relay fast after the arrest of Padmanabhan.

Earlier, BJP general secretary A N Radhakrishnan was on an indefinite fast for eight days.

The state had witnessed massive protests by devotees and right-wing groups opposing the entry of girls and women in the 10-50 age group into the Sabarimala temple since the Kerala government decided to implement the apex court order.

Over a dozen women have so far made unsuccessful attempts to trek the holy hills.