We ended politics of caste and nepotism, claims Yogi Adityanath

Talking about farmers, the chief minister said that his government had waived loans of 86 lakh farmers. 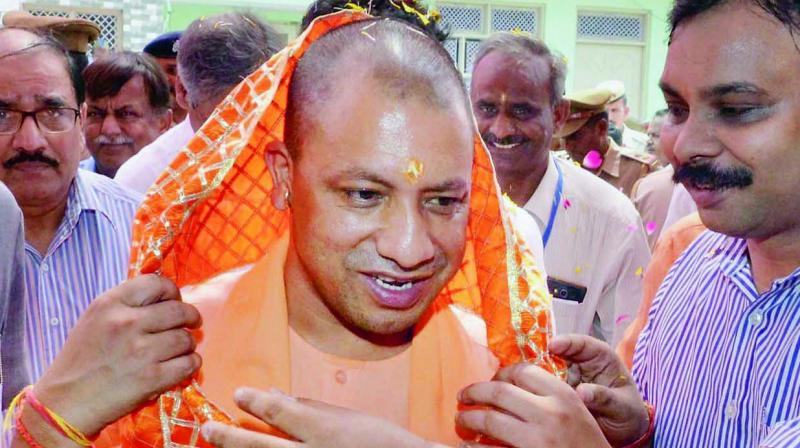 Lucknow: UP chief minister Yogi Adityanath said here on Tuesday that his government had freed the state from the politics of casteism and nepotism and had also removed the shadow of fear that loomed large.

“We have a government that works for all without any caste bias or family considerations,” he said.

He said that in the past six months, his government had addressed 34 lakh complaints which indicated the kind of work that had been done by previous government.

Addressing a press conference to mark his six months in office, the chief minister said that when he took over office, the atmosphere was certainly not investor-friendly and completely anarchy prevailed.

“We burnt the midnight oil and worked till late into the night. The bureaucracy was demoralised and the law and order situation was poor. We tried to improve the situation and I can say that not a single communal riot took place in the past six months,” he said.

Mr Adityanath added that his government had come down heavily against criminals. “The police arrested 1,106 criminals, 15 were killed in encounters and 88 policemen were injured. We lost one sub-inspector in an encounter. The ill-gotten properties of 69 criminals were seized and the government also took back Rs 3,500 crores worth of land encroached by land mafia,” he said.

Talking about farmers, the chief minister said that his government had waived loans of 86 lakh farmers.

“We ensured wheat and potato procurement. We cleared 95 per cent of cane arrears, we are giving solar power to farmers and also new agricultural techniques through Krishi Vigyan Kendras,” he stated.

The chief minister rubbished the criticism of Samajwadi Party president Akhilesh Yadav and said, “I don’t think he even knows what farming is all about.”

Mr Adityanath said that his government was trying to check migration of youth and he had already provided jobs to 6 lakh youths through skill development programmes.

The chief minister said that if given permission, he would like to link revenue records with Aadhaar cards in order to check fudging of these records.

He said he proposed a Bundelkhand expressway in order to develop the region and a feasibility report of this was already under preparation.