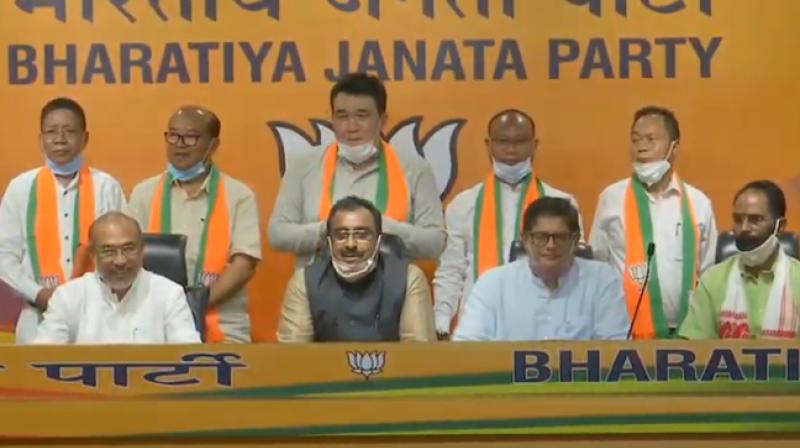 New Delhi: Five ex-Congress MLAs from Manipur, including nephew of former chief minister and senior Congress leader Ibobi Singh, who recently resigned from the state Assembly and the party, on Wednesday joined the BJP.

The BJP claimed that the state government has support of 34 MLAs in the Assembly, which has effective strength of 47 as there are 13 vacancies. The BJP-led coalition government had won the trust vote by 28-16 on Monday after eight Congress MLAs, including the five who joined the BJP, skipped the Assembly session defying the party whip. Those who joined the BJP include, Henry Okram, Paonam Brojen, Oinam Lukhoi Singh, Ngamthang Haokip, and Ginsuanhau Zou.

Joining the saffron fold at the BJP headquarters in presence of state chief minister N Biren Singh, the former MLAs  were welcomed by the national general secretary and the party’s pointsman for the Northeast Ram Madhav and vice president Baijayant Panda. Madhav, who accused the Congress of trying to unsettle the popular NDA government in the state, said there is no threat to the N Biren Singh government and claimed that the NDA government will not only complete its tenure but will be re-elected by majority. After joining the saffron fold, these five former MLAs met BJP president JP Nadda.

“Manipur faced Congress’s bad governance for 15 years. In 2017, BJP led coalition government was formed and in the last 3.5 years, Manipur has become one of the fastest growing states in the Northeast. It has witnessed 16 percent GDP growth, it was chosen by Prime Minister Narendra Modi for the ‘Ghar Ghar Jal’ project, additional 3,000 crore has been sanctioned for the roads. After almost 15 years, the state has come out of the overdraft under Biren Singh’s leadership. But Congress made various unsuccessful attempts to destabilize the government run by a popular CM...what the Congress accused the BJP for in Rajasthan and Madhya Pradesh, actually it has been doing all those unfair undemocratic practices in Manipur. They made an unsuccessful attempt during the recent Rajya Sabha polls also. But Manipur people support the BJP led NDA government,” said Madhav.