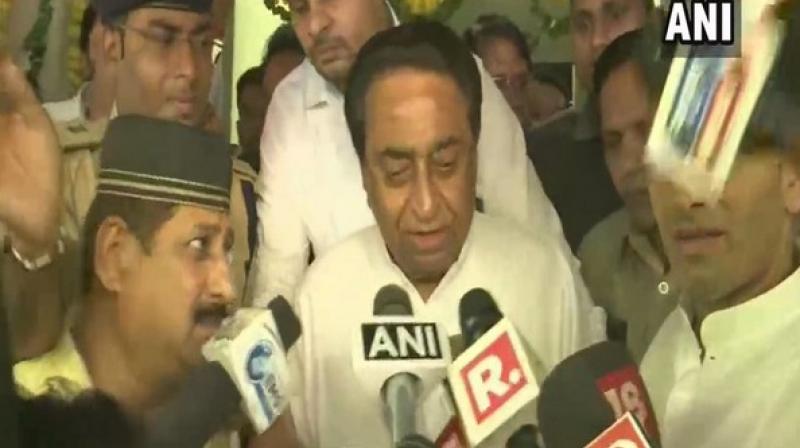 They have been booked for alleged criminal conspiracy, cheating, forgery and corruption on the complaint filed by Murali Chetturi, a deputy general manager of Central Bank of India. (Photo: ANI)

Bhopal: Calling the arrest of his nephew Ratul Puri in a bank fraud case a "mala fide action", Chief Minister Kamal Nath on Tuesday said that he is not connected with Puri's business while adding that the courts will take corrective stand in the matter.

"I have no connection with the business they are doing. I am neither a shareholder, director or anything (in the Puri's business). To me, it appears to be a purely mala fide action. I have full faith that courts will take a corrective stand in this," he told reporters here when asked about his nephew, Puri's arrest.

Puri was arrested on Monday after the ED questioned him. He will be produced before a court today.

On Sunday, the Central Bureau of Investigation (CBI) had booked Puri, former executive director of Moser Baer, and four others in connection with the bank fraud case.

Besides Puri, those who were booked by the agency are -- Deepak Puri, Nita Puri, Sanjay Jain, and Vineet Sharma.

They have been booked for alleged criminal conspiracy, cheating, forgery and corruption on the complaint filed by Murali Chetturi, a deputy general manager of Central Bank of India.

Earlier, calling the arrest of its former executive director Ratul Puri by Enforcement Directorate (ED) as "unfortunate", Moser Baer said that the company had operated in accordance with all legal compliances while adding that the case is 'motivated.'

"The arrest by Enforcement Directorate is unfortunate. Moser Baer had operated in accordance with all legal compliances and this case now, when Moser Baer is in National Company Law Tribunal (NCLT), is motivated," Moser Baer said in a statement.

Puri is also an accused in a money laundering case connected to the Rs 3,600-crore Agusta Westland VVIP chopper scam.

On Monday, Special CBI Judge Arvind Kumar had reserved the order for August 21 on Puri's plea seeking cancellation of a non-bailable warrant (NBW) against him in the case.

On August 14, the Delhi High Court had granted Puri interim protection from arrest till August 20.