Chidambaram made several comparisons between the Congress and BJP governments. 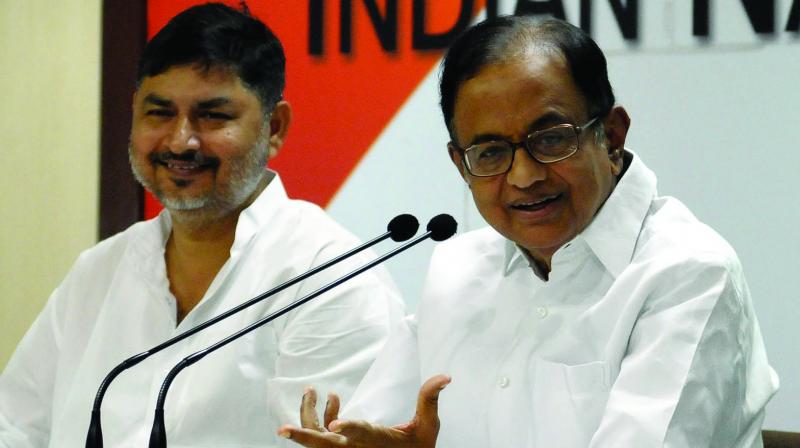 New Delhi: The Congress on Sunday launched a scathing attack on the BJP-led Central government over economic growth figures. Former finance minister P. Chidambaram said that the Congress-led UPA-1 and UPA-2 governments delivered the highest decadal growth since Independence. Taking a dig at the current dispensation, he alleged that three finance ministers are handling the economy at present — a de-facto, a de-jure and an invisible one. Mr Chidambaram highlighted that the average growth rates under the two UPA governments were at 8.36 and 7.68 per cent, while the same under the two NDA governments were 5.68 and 7.33 per cent respectively.

Mr Chidambaram made several comparisons between the Congress and BJP governments.

The Congress’ comments came after a report on GDP back series data prepared by the National Statistical Commission was released on the website of the ministry of statistics and programme implementation (MOSPI) on Friday. The report compares growth rates between old series (2004-05) and new series based on 2011-12 prices.

Taking on the Narendra Modi-led government over the staggering growth rate, Mr Chidambaram said that the current regime inherited an economy that was on the upswing.

Unfortunately, after the first two years, the government stumbled and the momentum was lost. The main reasons of slow growth in the present regime according to former finance minister were demonetisation, flawed implementation of GST and tax terrorism.

Reacting to the claim, BJP spokesperson Sambit Patra said the data was not official and that it had not been accepted by the government yet.