BJP’s Gulab Chand Kataria, Leader of the Opposition in the Assembly, said only a floor test can tell whether the government has a majority 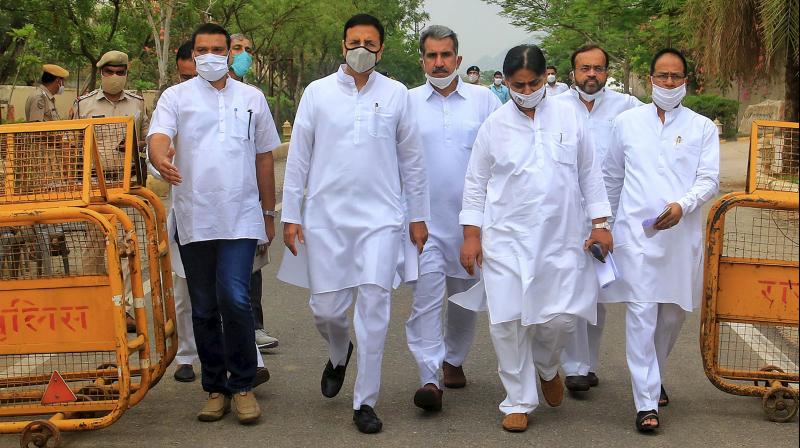 The beleaguered Ashok Gehlot government in Rajasthan might call a brief Assembly session in the coming week to prove its majority if the Rajasthan high court gives a favourable verdict to former deputy chief minister Sachin Pilot and his supporting MLAs who have challenged their disqualification by Speaker C.P. Joshi.

On Saturday, Mr Gehlot had met governor Kalraj Mishra with a list of 102 MLAs supporting his government.

Congress leader Ajay Maken, who has been sent to Jaipur from Delhi to help tackle the situation, said in a press conference: “The decision on when and how the floor test will happen has to be taken by the chief minister and the government. It is the CM’s discretion to move forward when required, and if it is required.”

Sources, however, said the Assembly session may be held as early as this week after the court verdict.

In the 200-member Assembly, the Congress has 107 MLAs, including Mr Pilot and the 18 MLA loyal to him, who have rebelled against the chief minister. Speaker C.P. Joshi had earlier sent disqualification notices to the rebel MLAs, after which they moved the high court. The next hearing in the matter will be held on Monday.

The RLD, which has one MLA, is a Congress ally, while the ruling party also has the support of 10 of the 13 Independent MLAs. The government considers both CPI(M) MLAs as being on its side.

The Bhartiya Tribal Party, which has two MLAs, has announced support to the Gehlot government on Sunday, and said it was now in a position to punch way above its weight despite its minuscule presence in the state Assembly. “We have two MLAs in a House of 200, yet we are in the position of kingmakers,” BTP president Maheshbhai C. Vasava said.

The two MLAs supported the ruling Congress in the state in last month’s Rajya Sabha polls. But when the power tussle between Mr Gehlot and Mr Pilot resurfaced recently, the BTP said it would remain neutral.

Mr Vasava said the party is now extending support to Mr Gehlot after an assurance that its demands related to the development of tribal areas will be met.

Sources said this might mean an expansion of the Gehlot Cabinet and accommodation of new faces. While the Congress’ central leadership has fully backed Mr Gehlot in the political feud with his former deputy, they have also made it clear to him to “clear up the mess” and accommodate more people.

In Jaipur, meanwhile, the Congress demanded the resignation of Union minister Gajendra Singh Shekhawat, saying he has no moral authority to
stay in the Union Cabinet when he is heard on audio clips that indicate a BJP conspiracy to topple the Rajasthan government. Mr Gehlot rejected the BJP’s dismissal of the clip in which the minister’s voice is heard, telling a television channel that he is prepared to quit politics if it is later proved that the tape is fabricated.

As speculation grew over the Gehlot government facing a floor test in the Assembly after the CM’s meeting with the governor, the BJP’s Gulab Chand Kataria, Leader of the Opposition in the Assembly, said only a floor test can tell whether the government has a majority or not.
Amid the face-off between the Gehlot and Pilot camps, Congress’ chief spokesman Randeep Singh Surjewala said it is now up to the rebel leader to fall into the BJP’s illusory trap or return to the fold and discuss their differences with the family. He said senior party leaders had talked to him several times in recent days.

In an interview to PTI, Congress veteran Digvijaya Singh said he had tried to get in touch with Mr Pilot three or four times but the Rajasthan leader did not take the calls. “Age is on your side. Ashok (Gehlot) may have offended you, but all such issues are best resolved amicably. Don’t make the mistake that Scindia made,” he advised, referring to Madhya Pradesh leader Jyotiraditya Scindia switching sides to join the BJP in March this year.