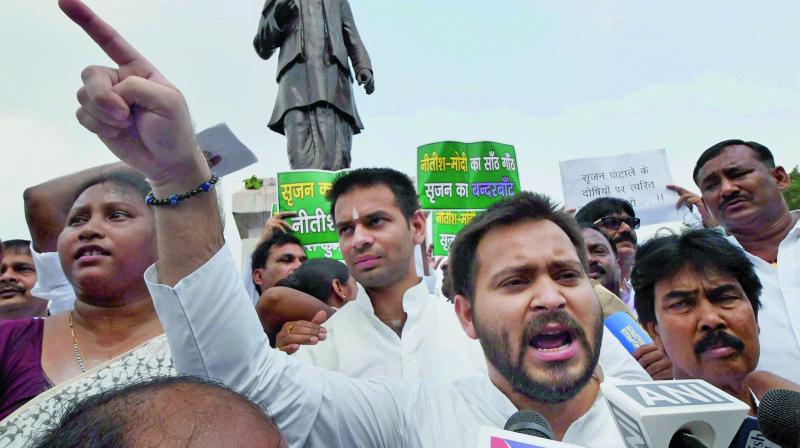 Patna: RJD leader Tejashwi Yadav on Friday attacked the Nitish Kumar government for its "failure" to check crimes against women and expressed concern over sexual exploitation of inmates of a shelter home for them.

Speaking outside the state assembly on the inaugural day of the monsoon session, Yadav expressed concern over reports that medical tests have "confirmed" that 29 girls lodged at a state-funded shelter home in Muzaffarpur district had "suffered sexual exploitation" and demanded stern action against those found guilty.

"All the incidents of rape and other types of crimes against women and small girls have been taking place right under the nose of Chief Minister Nitish Kumar who also holds the Home portfolio. His inability to effectively check such incidents, which seem to have become a daily affair, make us wonder about his priorities," Yadav, who is also the Leader of Opposition told reporters.

He said our party has always been raising such issues inside as well as outside the House. "We will continue to do so in future. We were the first to raise alarm over reports of sexual exploitation of girls at the Muzaffarpur home and now even medical tests have confirmed what we said," Yadav claimed.

The Leader of Opposition alleged that the state government chose to look the other way and acted only when the outcry became too loud to ignore.

"In Muzaffarpur, we suspect that the government had a soft corner for those running the NGO which controlled the shelter home. One of the NGOs bosses was a part of Kumars campaign team during the last assembly polls," the RJD heir apparent alleged.

More than 10 people including all staff members of the shelter home and also some government officials were arrested last month after an FIR was lodged by the state Social Welfare department when the report of social audit conducted by a Mumbai-based institute came up with allegations of sexual exploitation of the inmates.

The shelter home has also been sealed while the NGO entrusted with running the same has been blacklisted. All the girls have been sent to shelter homes in other parts of the state.

Authorities at the Patna Medical College Hospital, where the girls were made to undergo medical examinations, were, however, tight-lipped on the matter and they said the report was "confidential and sent to the authorities concerned who are likely to place the same before a court of law."

Meanwhile, an MLC of the BJP which is a part of the ruling coalition lashed out at the administration over the rise in crimes against women.

"It seems the entire administrative machinery has devoted itself to cracking down on illegal liquor trade and the sand mining mafia. Perhaps they are making some money in the process too. While the people guilty of these crimes must be punished, exemplary punishment must be meted out to those officials whose dereliction of duty may have led to any such heinous offence," BJP MLC Nawal Kishore Yadav said.