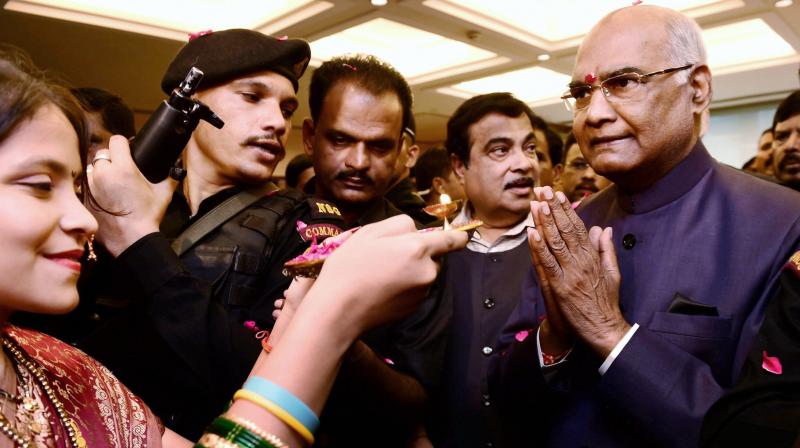 He succeeds Pranab Mukherjee whose Presidential term will end on July 24.

Kovind becomes the second Dalit to occupy the office after K R Narayanan, who was at the Rashtrapati Bhavan from 1997 to 2002.

He will take oath as President on July 25.

An emotional Kovind said: "I represent the many Kovinds who work hard for their livelihood."

He added: “I thank all who supported me from across the country. I feel very emotional.”

Prime Minister Narendra Modi too congratulated Ram Nath Kovind, saying he was gladdened by the extensive support the NDA nominee got.

Modi also congratulated Opposition nominee Meira Kumar for her campaign, stating the contest was in the spirit of democratic ethos and values which "we are all proud of".

The presidential poll on Monday saw nearly 99 per cent voting, the highest ever, according to returning officer.

A lawyer by profession, a Dalit leader by caste, a Hindutva ideologue by thinking and a dedicated Bharatiya Janata Party (BJP) worker by political affiliation – Kovind was born on October 1, 1945 at Kanpur Dehat, Uttar Pradesh.

Kovind belongs to the Dalit community Koli and had worked extensively in Uttar Pradesh and Bihar and also has the backing of BJP's ideological parent, the Rashtriya Swayamsevak Sangh (RSS).

He became the Advocate-on-Record of the Supreme Court of India in 1978. He had practiced in Delhi High Court and Supreme Court for about 16 years until 1993. Kovind was enrolled as an advocate in 1971 with the Bar Council of Delhi.

He was elected to the Rajya Sabha in April 1994 from Uttar Pradesh and served for two consecutive terms for 12 years till March, 2006.

Kovind had also been BJP Scheduled Caste Morcha chief from 1998 to 2002 and President of the All-India Koli Samaj.

He has served as the national spokesperson of the party. BJP even tried to project him as an alternative to Mayawati in Uttar Pradesh. On 8th of August 2015, the President of India appointed him the Governor of Bihar. He was elected to Rajya Sabha from state of Uttar Pradesh during the two terms of 1994-2000 and 2000-2006.

Kovind is also known as a pioneer in spreading education. During his parliamentary tenure of 12 years, Kovind emphasized on the development of basic infrastructure for education in rural areas by helping in construction of school buildings in Uttar Pradesh and Uttrakhand under MPLAD scheme. As an advocate, Kovind took a lead in providing free legal aid to weaker sections of society, specially SC/ST women, needy and the poor under the aegis of “Free Legal Aid Society” in Delhi.

Kovind is being credited of grooming several leaders for the BJP and the RSS.

Ram Nath Kovind is known for his proximity with Home Minister Rajnath Singh, but has also been a hard core supporter of Prime Minister Narendra Modi's demonetisation drive.