The two Presidential nominees - NDA's Ram Nath Kovind and Opposition's Meira Kumar - were both from the Dalit community. 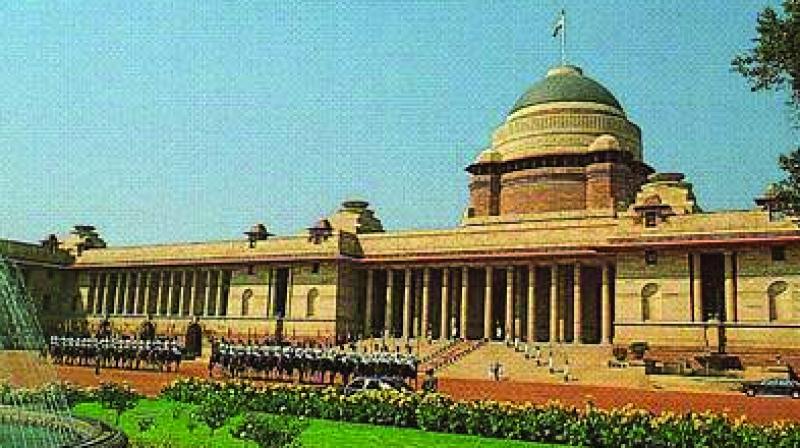 New Delhi: The Presidential election on July 17 saw close to 100 per cent polling. A total of 771 members of Parliament and 4,109 legislators were eligible to cast votes.

The two Presidential nominees - National Democratic Alliance's (NDA) Ram Nath Kovind and Opposition's Meira Kumar - are both from the Dalit community and have canvassed hard by visiting states to seek the support of legislators.

As the country gets Ram Nath Kovind as the 14th President, here is a list of achievements of previous Raisina Hill occupants:

Rajendra Prasad (1950 - 1962): Prasad was the first President of Independent India and stayed in office for the longest term of around 12 years. Post the completion of his tenure, he quit the Congress and set up new guidelines for parliamentarians which are still followed. Prasad played a major role in forming the Bihari Students Conference in 1906 and served as the president of the Constituent Assembly that drafted the Constitution of India.

Sarvepalli Radhakrishnan (1962 - 1967): September 5, the birthday of Radhakrishnan, one of the most learned scholars and statesmen of the nation, is celebrated as 'Teacher's Day' in India. He was one of the first to receive the Bharat Ratna, in 1954, and was also the first to lead the line of five Presidents to receive the Bharat Ratna till now. Shortly before his death in 1975, he was honoured with the Templeton Prize for his work.

Dr. Zakir Hussain (1967 - 1969): Dr. Hussain was the country's first Muslim president, who occupied the office for the shortest period. His untimely death two years after being elected made VV Giri the first acting president of India. Dr. Hussain was an avid intellectual educator and the co-founder of Jamia Millia Islamia University.

Varahagiri Venkata Giri (1969-1974): Giri resigned two months after being appointed as the acting President of India, following the death of Dr. Zakir Hussaian as he wanted to become an elected President. He was later elected as the fourth President of India in 1969. After India attained Independence from the British, VV Giri had been appointed as the High Commissioner to Ceylon. In 1957, he headed a team of prominent public personalities and academicians to establish The Indian Society of Labour Economics (ISLE) and received the highest civilian award, the Bharat Ratna, in 1975, for his contribution in the area of public affairs.

Fakhruddin Ali Ahmed (1974 - 1977): Ahmed served as the President of India during the time of Emergency. He was the second Muslim to be elected as the President of India and also the second to die in state. Ahmed was awarded an honorary doctorate by the University of Pristina, in Kosovo, in 1975. In his honour, a medical college Fakhruddin Ali Ahmed Medical College has been named at Barpeta, Assam.

Neelam Sanjiva Reddy (1977 - 1982): Reddy was the sixth President of India and the first to be elected unopposed and the youngest to occupy Rashtrapati Bhavan. One of the incredible feats that Reddy achieved was that he renounced residency at the Rashtrapati Bhavan and took a 70 percent cut in his salary as a gesture toward the poor economic conditions of the masses in 1977.

Giani Zail Singh (1982 - 1987): The only Sikh President of India till now, Singh also served as the Chief Minister of Punjab. He came under the scanner during Operation Blue Star, when then prime minister Indira Gandhi ordered the security forces to combat Jarnail Singh Bhindranwale and his armed followers in the Golden Temple, Amritsar. Since the order to the armed forces has to come directly from the President, questions were raised as to how Gandhi managed to order the army to carry out the mission.

Ramaswamy Venkataraman (1987 - 1992): As a President of India, Venkataraman had the distinction of working with four Prime Ministers. Before being elected as the President, Venkataraman served a stint as the Governor of the International Monetary Fund, the International Bank for Reconstruction and Development, and the Asian Development Bank. He was also among the delegates of India at the United Nations General Assembly and was also elected the President for life of the United Nations Tribunal.

Shankar Dayal Sharma (1992 - 1997): Sharma earlier served as the eighth Vice-President of India and the Chief Minister of Bhopal state. As the member of the Congress, he accompanied the movement against the Nawab of Bengal, who expressed desire to retain the princely state. Sharma was arrested in 1948 for leading a public agitation against the Nawab. During his tenure, Sharma rejected the mercy petitions in all 14 cases placed before him.

Kocheril Raman Narayanan (1997 - 2002): Popularly known as KR Narayanan, he was the first Dalit-origin President of India. Narayanan, who formerly served as a diplomat, served as India's ambassador to China and the United States. As a President, he always explained his decisions to the nation, and brought openness and transparency in the functioning of the President. During his tenure, Narayanan dissolved the Lok Sabha twice - firstly he refused to dismiss the Kalyan Singh Government in Uttar Pradesh in 1997 and a year later, the Rabri Devi Government in Bihar in 1998.

APJ Abdul Kalam (2002 - 2007): Known for his role in the development of India's ballistic missile and nuclear weapons programmes, APJ Abdul Kalam was the first scientist to become a President in 2002. Kalam was affectionately known as the People's President and also received the Bharat Ratna. During his tenure as the President of India, Kalam rejected one case and commuted a death sentence in another, while he did not decide on 23 other cases.

Pratibha Patil (2007 - 2012): Patil was the first woman to become the President of India. During her tenure, she commuted death sentence in 19 cases and rejected petitions of three.She was also criticised for allegedly using government funds for taking trips overseas, often accompanied by relatives. She also made headlines for alleged acquisition of land in Pune, Maharashtra, to construct her retirement home.

Pranab Mukherjee (2012 - 2017): The outgoing President Pranab Mukherjee, who served as the 13th President of India, will demit office on July 25. Before entering into politics, Mukherjee worked as a lecturer and journalist. Mukherjee is the only President who served all the major portfolios as the Centre - Foreign, Defence, Commerce and Finance - at different times in his political career. He rejected 30 cases of death sentence and commuted to life the death sentences of four convicts. During his term, he has spent a considerable amount of time promoting the need for improving standards of higher education and holding the compass to the political leadership to remain steadfast in observing Constitutional probity. In 1984, Mukherjee was voted as the Best Finance Minister in the World by the Euromoney magazine and is the only Finance Minister to serve the post both, in the Pre-Liberisation and Post-Liberisation eras.