RJD sources had earlier hinted that Tejashwi could be in New Delhi in connection to disproportionate assets case against him. 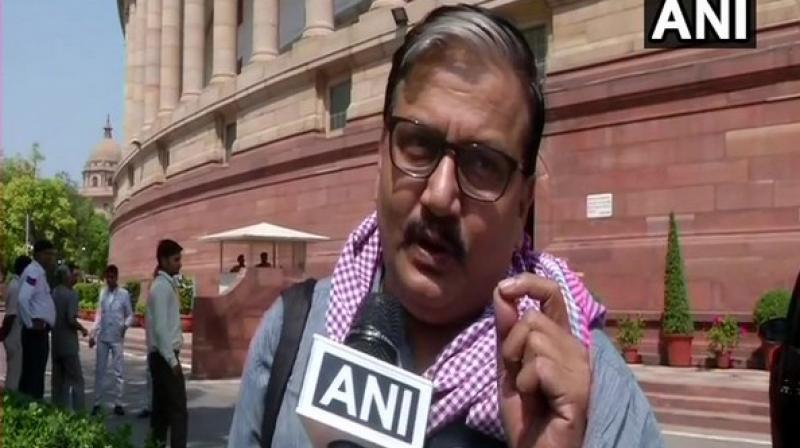 Tejashwi, who has been known as one of the most vociferous critics of the Nitish Kumar-led National Democratic Alliance (NDA) government, was criticised for being tight-lipped over the crisis in Muzaffarpur. (Photo: ANI)

New Delhi: Even as speculations were rife about RJD leader Tejashwi Yadav "missing" from the scene while the state grappled with a deadly outbreak of the encephalitis, party leader Manoj Jha on Thursday claimed he is in Delhi and closely monitoring the situation.

Rashtriya Janata Dal (RJD) sources had earlier hinted out that Tejashwi could be in the national capital in connection with a hearing in a disproportionate assets case against him in a Delhi court.

"Our leader Tejashwi Yadav is closely monitoring the situation in Muzaffarpur. Currently, he is in Delhi," Rajya Sabha MP Jha told ANI when asked whereabouts of Yadav.

Tejashwi, who has been known as one of the most vociferous critics of the Nitish Kumar-led National Democratic Alliance (NDA) government, was criticised for being tight-lipped over the crisis in Muzaffarpur due to an outbreak of Acute Encephalitis Syndrome (AES), which has claimed the lives of 117 people, majority of whom were children in the district alone.

On Wednesday, RJD leader Raghuvansh Prasad Singh claimed that Tejashwi told ANI, "I don't know exactly where he is. Maybe he has gone to watch the World Cup. I am not sure about it."

As per data, a total of 98 deaths were reported at government-run Sri Krishna Medical College and Hospital while 19 children died at Kejriwal hospital in the district due to the vector-borne disease till 8 am today.

The AES is a viral disease that causes flu-like symptoms such as high fever, vomiting and in extreme cases, can lead to coma, brain dysfunction, seizure and inflammation of heart and kidney.