PDP caught off guard by BJP decision to pull plug

The PDP did not agree to it which set off differences of point of no return. 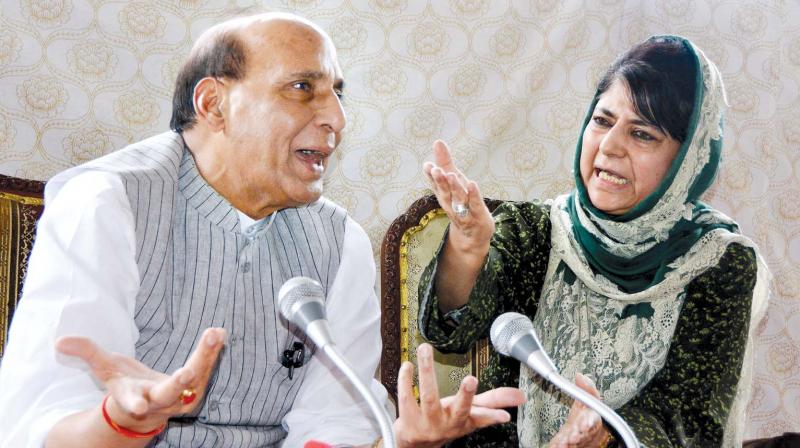 Srinagar: It seems the PDP and its leadership were taken unawares by the sudden decision of their alliance partner — the BJP — to yank support from Mehbooba Mufti-led coalition government. Hence, the move is seen by Kashmir watchers as a huge embarrassment to Ms Mufti as well as her party.

But it is also a fact that signs that the partnership between what her father Mufti Muhammad Sayeed had termed as “North Pole and South Pole” is falling apart before completion of the stipulated six-year term of the government were there for months.

The scepticism was only strengthened after the two parties publicly took sharply divergent paths on various issues, the latest being extending conditional ceasefire beyond Ramzan and resuming anti militancy operations in the Valley. The rift between the two sides came to the fore earlier also when chief minister turned down the BJP’s demand that the probe into the gangrape and murder of an 8-year-old nomad girl inside a temple in the state’s Kathua district in January this year be handed over to the CBI.

Two BJP ministers had even participated in a rally held in support of the accused. They were subsequently made to quit in the run up to a reshuffle in the Council of Ministers but reportedly continued to be encouraged by the BJP leadership. While announcing the BJP’s decision in New Delhi, the party national secretary general Ram Madhav said, “We have taken a decision, it is untenable for BJP to continue in alliance with PDP in Jammu & Kashmir, hence we are withdrawing.”

Sources in the PDP said that after deciding not to extend the conditional ceasefire announced by the Centre for the Islamic fasting month of Ramzan, the Modi government has decided to launch a tough military campaign against separatist militants in the restive state and give a “free hand” to security forces to deal with the situation. The PDP did not agree to it which set off differences of point of no return. Yet the PDP was not expecting its coalition partner will call it a day so soon.

The chief minister and the PDP had also pleaded for extending the Ramzan truce beyond Id-ul-Fitr to pave the way for holding talks with the separatists which was ignored by the Centre, the sources said.

However, the sections of security forces and also senior Army commanders were against extending Ramzan ceasefire and even eager not only to resume but also bump up anti militant and anti terror operations across the Kashmir Valley at earliest. They are planning to launch ‘Operation All Out II’ against the militants as during the first phase of the campaign, more than three hundred militants including several top commanders were killed.

Local watchers see in the BJP’s decision also an attempt to charm its constituency as the party was being openly accused of surrendering for power lust the interests of Jammu where from it won almost all the 25 seats in the 2014 election.