“We have safeguarded Article 370 and 35-A (of the Constitution) and we will continue to do that,” she said. 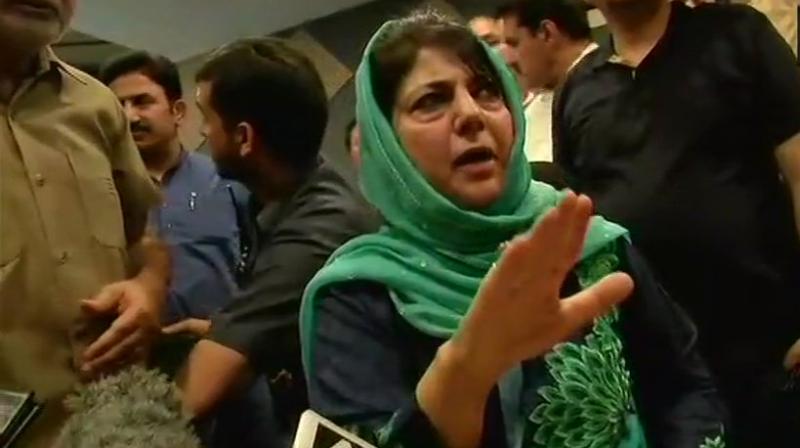 Srinagar: Outgoing Jammu and Kashmir chief minister Mehbooba Mufti, stunned by the BJP’s decision on Tuesday afternoon to yank support from the alliance government it had formed with her People’s Democratic Party (PDP) in 2015, leading to her resignation and Governor’s rule in the state, sought to wriggle out of the embarrassing situation she found herself in by putting up a brave front and listing the differences between the two parties once described by her father as ‘North Pole and South Pole’.

Maintaining that Jammu and Kashmir was not enemy territory as being perceived by few, she said, “We had always said muscular security policy will not work in J&K, reconciliation is key.”

Just hours earlier, BJP’s point person for J&K Ram Madhav had announced the end of the BJP-PDP coalition government and held Ms Mufti’s leadership responsible for the alliance’s premature termination. Ms Mufti, who met governor N.N. Vohra soon after to submit her resignation, did not hit back directly.

Instead, she began the press conference called at her Gupkar residence here by raising Article 370 and Article 35-A, under which the state enjoys a special status.

“We have safeguarded Article 370 and 35-A (of the Constitution) and we will continue to do that,” she said.

Though the PDP and its leadership were taken unawares by the sudden decision of the BJP to withdraw support without any warning, a move seen by Kashmir watchers as a huge embarrassment to Ms Mufti as well as her party, she said, “I am not shocked (by BJP exit). We didn’t do this alliance for power. Had we done it for power then there were numbers with the National Conference and the Congress. We did it for some objective. This alliance had a bigger motive — unilateral ceasefire, PM’s visit to Pakistan, withdrawal of cases against 11,000 youth.”

Further embarrassment for the PDP came when the National Conference and the Congress on Tuesday refused to consider government formation with Ms Mufti’s party after her resignation.

After Ms Mufti’s resignation, Congress leader Ghulam Nabi Azad said, “There is no question of forming an alliance with the PDP in J&K... the BJP had committed a Himalayan blunder by forming a govt with the PDP.”

National Conference leader Omar Abdullah said, “I was expecting it (PDP-BJP split) to happen later this year. The timing is too ungodly and it indeed caught me by surprise.”

Ms Mufti, whose party now faces the threat of a political backlash for joining hands with the BJP, said that she handed over her resignation to the governor and that her party was not interested in exploring possibility of entering into an alliance with any other party to form a new government.

In what seemed like a direct message to her constituents in the Kashmir Valley, she said, “Our alliance with the BJP was meticulously planned. We joined hands to solve the issues that Kashmir was facing.”

While acknowledging that choosing the BJP as an ally did not go well with the people in the Valley, where the PDP had won most of it 28 seats in the 2014 Assembly elections, she said, “We wanted talks with the government, a unilateral ceasefire in Jammu and Kashmir, a policy of reconciliation and confidence-building-measures to address the issues.”

She said that her government also retained the territorial integrity of the state and addressed the insecurity of the minority in a case of cow vigilantism and in Rasana village of Kathua district where an 8-year-old nomad girl was gang-raped and subsequently murdered inside a temple in January year. Though the two parties have publicly taken sharply divergent positions on various issues, including the extension of the conditional ceasefire beyond Ramzan and resuming anti-militancy operations in the Valley, removal of AFSPA from the Valley and political engagement with the separatists and Pakistan, the rift came to the fore when chief minister turned down the BJP’s demand that the probe into the gang-rape and murder of an 8-year-old nomad girl inside a temple in the state’s Kathua district in January this year be handed over to the CBI.

Local watchers said Ms Mufti, who led the PDP’s stunning emergence on Kashmir’s political scene at a time when the ground was bristling with the aftereffects of insurgency, and surprised everybody with her grit and endurance, may find it difficult to rebuild genuine bridges with people.