India   Politics  20 May 2019  'What has he achieved by sitting inside the cave?' LJD on PM's Kedarnath visit
India, Politics

'What has he achieved by sitting inside the cave?' LJD on PM's Kedarnath visit 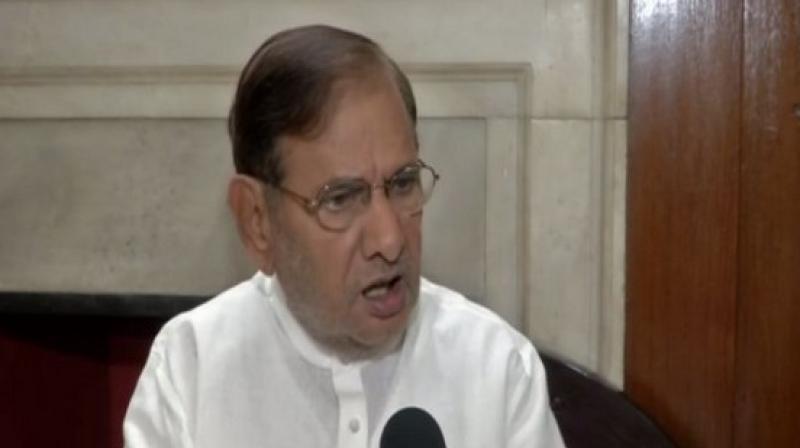 'I do not understand what people get from such caves? Did people bring him to the Centre to perform religious activities? This is all drama to gain publicity for which the Prime Minister has even violated poll conduct,' LJD leader Sharad Yadav said. (Photo: ANI)

New Delhi: Loktantrik Janata Dal (LJD) leader Sharad Yadav on Sunday took a swipe at Prime Minister Narendra Modi for visiting and meditating at Kedarnath temple and allowing media to cover it on a large scale even as the last phase of seven-phased Lok Sabha election was underway.

He asked if the Prime Minister wants to convert the Lok Sabha into a 'Kirtan Sabha'.

Prime Minister Modi on Saturday offered prayers at the Himalayan shrine of Kedarnath, a day after campaigning for the Lok Sabha polls came to a close.

After spending over 15-hours meditating inside a holy cave of Kedarnath, he visited Badrinath, another temple in Uttarakhand's revered 'Char Dham' on Sunday.

Several opposition leaders have been targeting Modi for his visit to Kedarnath and Badrinath temples stating that his action was a clear violation of the Model Code of Conduct (MCC) and it influences voters through a public display of his personal religious activities.

Echoing similar sentiments, the LJD leader said: "I do not understand what people get from such caves? Did people bring him to the Centre to perform religious activities? This is all drama to gain publicity for which the Prime Minister has even violated poll conduct."

Yadav, on being asked about his view on the exit polls which are giving a clear majority to BJP-led NDA at the Centre, said: "Exit polls have no value. This is unfortunate for the country that we copy everything from the United States and Europe. Exit poll cannot be held in this country. I personally never believe in the exit polls as they have no accurate figures."

ABP-Nielsen poll projected 267 for the NDA, 127 for the UPA and 148 for 'Others'. Of the 'Others', the grand alliance in Uttar Pradesh is getting an estimated 50 seats.

Voting was held on Sunday for 59 Lok Sabha seats -- 13 each in Uttar Pradesh and Punjab, nine in West Bengal, eight each in Bihar and Madhya Pradesh, all four in Himachal Pradesh, three in Jharkhand and the lone seat of Union Territory Chandigarh.

As per the EC, a voter turnout of 62 percent was registered till 7 pm in the seventh phase. Counting of votes is scheduled on May 23.