India   Politics  20 May 2019  BJP requests EC to conduct repolling in booths affected by violence in the LS polls
India, Politics

West Bengal went for polls in all the phases of the Lok Sabha elections witnessed violence in every phase. 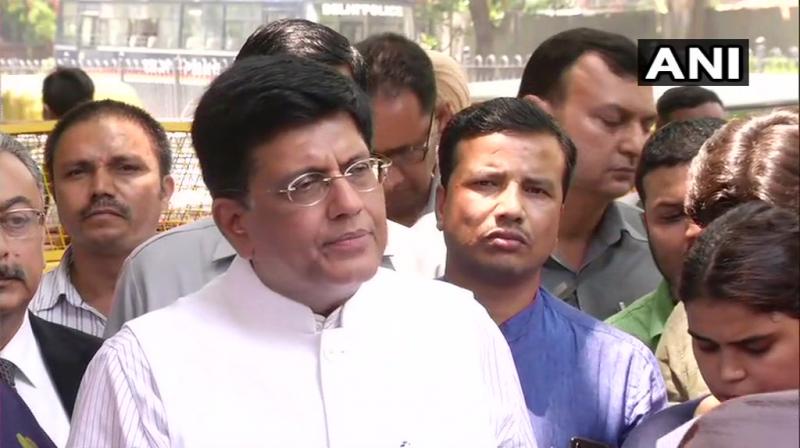 ‘We have also demanded that the EC to withdraw the false cases made against BJP leaders in West Bengal,’ Piyush Goyal also added. (Photo: ANI)

New Delhi: A BJP delegation led by Defence minister Nirmala Sitharaman and Railway minister Piyush Goyal approached the Election Commission (EC) and urged it to conduct repoll in the constituencies where violence had taken place during all the phases of the Lok Sabha polls in some states.

Speaking to media here, he said, "We have met the Election Commissioners and informed them about the violence that had taken place in all the seven phases of the Lok Sabha polls and requested for repolling in all the violence-affected constituencies."

"We have also demanded that the EC to withdraw the false cases made against BJP leaders in West Bengal," Goyal added.

The Union minister further said, "We have informed the EC about West Bengal chief minister Mamata Banerjee's threat to people of the state that she will deal with them after the polls."

"We feel that there is a chance of violence in West Bengal now and even after the counting is over. Therefore, we request the poll watch body to ensure that the Central forces will continue to be stationed in the state till the Model Code of Conduct (MCC) is over," added the Union minister.

Expressing concern to ensure that the counting process remains free and fair, Goyal further said, "We requested EC to ensure that in all EVM strongroom, the Central forces should be stationed."

To make sure the counting process remains free and fair, "We have requested the EC observers and special observers to be present in the counting booths in the states of Odisha, West Bengal, Karnataka, Madhya Pradesh, and Chhattisgarh."

Large scale violence was reported from different parliamentary constituencies across West Bengal on the seventh phase of the general elections with Trinamool and BJP blaming each other for the violence.

While vehicles of few leaders were vandalised in poll-related violence, BJP has also accused TMC of beating its office-bearers.

West Bengal went for polls in all the phases of the Lok Sabha elections witnessed violence in every phase.

The counting of votes for the Lok Sabha polls will take place on May 23.