'Those who refer to Hindutva as terrorism are anti-nationals,' says Pragya Thakur

'The riots of 1984 were not riots but a massacre. A guilty of those riots is the Chief Minister of Madhya Pradesh,' Thakur said. 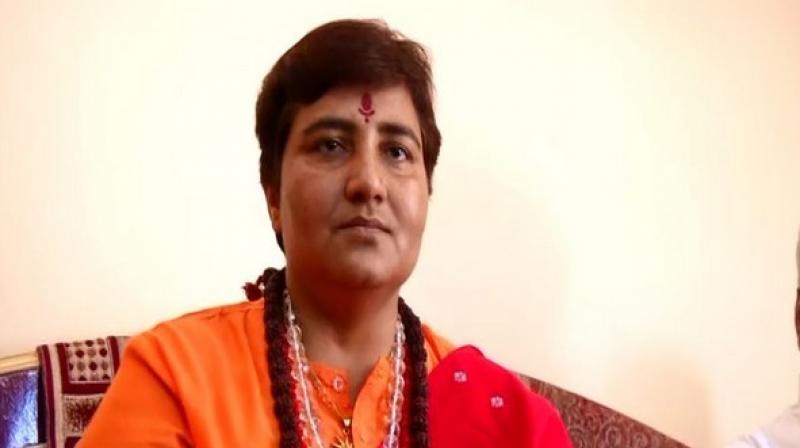 Pragya said: 'Conspirators went to the extent of treating me inhumanly during the last nine years when I was in custody. I have been given clean chit by the investigative agency.' (Photo: ANI)

Bhopal: A day after Prime Minister Narendra Modi defended Pragya Singh Thakur's candidature from Bhopal Lok Sabha seat, she said that those who refer Hindutva as terrorism are anti-nationals.

“The riots of 1984 were not riots but a massacre. A guilty of those riots is the Chief Minister of Madhya Pradesh. Those who refer to Hindutva as terrorism are anti-nationals, anti-Army and anti-religion. These anti-Hindutva and anti-society people should be concerned about their end,” Pragya told reporters here.

On Friday, Modi in a television interview said, “When Indira Gandhi died in 1984, her son said when a big tree falls, the earth shakes. Thereafter, there were thousands of Sikhs who were massacred. Was it not terror? Was it not terror unleashed by a few people? Despite that he was made the Prime Minister and the neutral media never asked a question like it is doing now.”

“A woman, a Sadhvi was tortured like this, no one raised a finger. I have lived in Gujarat; I understand the modus operandi of Congress. Like a film script, the Congress works to build a narrative. They will pick something, add something to it, add a villain to the story to build a false script for propaganda,” he said.

When asked to comment on her remark that she might contest elections from jail, Pragya said: “Conspirators went to the extent of treating me inhumanly during the last nine years when I was in custody. I have been given clean chit by the investigative agency. But they kept me behind bars. Like this, they are also involved in conspiracy right now.”

Speaking on her remark on former Anti-Terrorist Squad chief Hemant Karkare, she said: “I never give an imprudent statement. I speak what is there. I have already apologised for my comment.”

“Whosoever dies by terrorists’ bullets is a martyr. Can you tell those people who had given (me) inhuman treatment for nine years to seek my forgiveness?” she asked.

On Thursday, Thakur who is contesting against senior Congress leader and former Chief Minister of Madhya Pradesh Digvijaya Singh in Bhopal, had said that Karkare lost his life because she had “cursed him”.

Thakur is among the seven accused facing trial in Malegaon blast case, wherein six people were killed and a dozen others were injured when a bomb placed on a motorcycle exploded in Maharashtra’s Malegaon on September 29, 2008.