Deve Gowda was a much better PM than Modi: HD Kumaraswamy 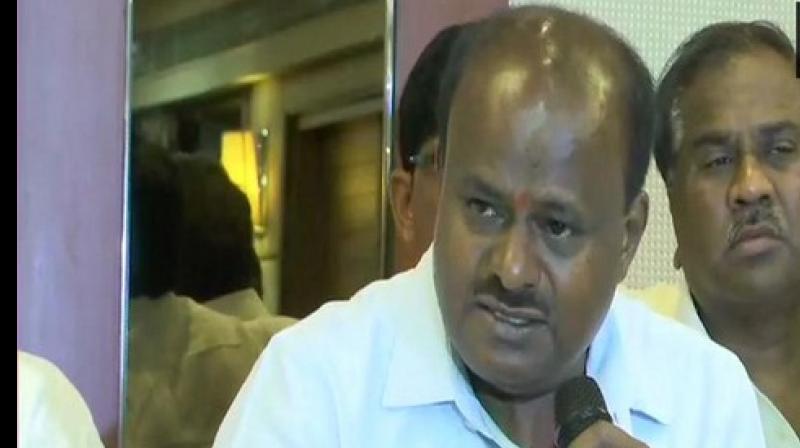 Kumaraswamy in an exclusive interview to ANI said that during the tenure of Deve Gowda as the Prime Minister, the country was peaceful as there was not even a single terror attack. (Photo: File)

Hubli: Karnataka Chief Minister HD Kumaraswamy on Saturday said that his father HD Deve Gowda’s ten-month long tenure as the Prime Minister of India was much better than Prime Minister Narendra Modi’s so far as far as the country’s internal security is concerned.

Kumaraswamy in an exclusive interview to ANI said that during the tenure of Deve Gowda as the Prime Minister, the country was peaceful as there was not even a single terror attack.

Janata Dal-Secular supremo Deve Gowda was the Prime Minister of the country for less than a year from June 1, 1996, to April 21, 1997.

When asked to comment if his father’s month-long tenure was better than Prime Minister Modi’s five-year government, he said: “Absolutely. You can go through the records to see what happened in Deve Gowda’s 10 month government and five years under the leadership of Prime Minister Modi.”

Citing the relative calm situation in Jammu and Kashmir during the tenure of his father, Kumaraswamy said: “When my father was the Prime Minister, was there any terrorist activity in this country? The entire country was calm at that time.”

“There was no clash between India and Pakistan. There was not a single blast in Jammu and Kashmir. Even inside the country, there was no bomb attack,” he said.

Prime Minister Modi during an election rally at Chitradurga in Karnataka had said that the whole world stood with India, but “our Mahamilavati Dal” (Congress-JDS) was condemning Modi instead of Pakistan.

“He doesn’t know the meaning. He can speak but misusing his office is wrong. In this country, several Prime Ministers came. Several times the India-Pakistan war took place. Nobody has taken advantage of those issues for their personal benefits,” he said.

“He (Prime Minister Modi) is the only person, he is misleading people that he went to Pakistan border and he only dropped the bomb on terror camps in Balakot. That way he is projecting himself,” Kumaraswamy said, in response to a question where he had said that Modi does not know the difference between Balakot and Bagalkot.

Kumaraswamy’s response came after PM Modi, while addressing a poll rally in north Karnataka, said: “Now tell me - where is the Congress and the JDS vote bank? Is it in Bagalkot or Balakot? This Congress-JDS has to decide.”

On being asked to respond on his statement that ‘Modi put make-up and wax on his face’ before the camera, Kumaraswamy said: “All BJP candidates are telling people to vote for us (BJP) by seeing the face of Narendra Modi. That is their request to the masses. For that reason only, I said."

Answering a question as to why he broke down at an event in Bengaluru, Kumaraswamy said: “I wept because I am a very emotional and sensitive man. I am always looking at the mood of the people. I was a little bit upset, so I wept in the beginning.”

“But now the people are actually getting confident. The reaction or feeling of the people is that Kumaraswamy has done a good thing by joining hands with the Congress to form government. He is looking forward to the development of Karnataka.”

“He (Deve Gowda) is a good administrator. He is an experienced person. He has experience in a political career. He is better than everybody, according to me. He has already projected the name of Rahul Gandhi (as PM),” he said.

“Whatever experience he has in his political career, he will be advising Rahul ji to run a good administration,” Kumaraswamy said while pitching the name of Rahul as the prime ministerial candidate if a non-BJP government is formed at the Centre after the Lok Sabha polls.

Adding that Deve Gowda might play a major role as an advisor to everybody in a coalition government after getting voted to power in the general elections, he said: “Most probably, there is not going to be a BJP government at the Centre.”

“We have to form the government with several regional parties combined together. At that time, I think Deve Gowda may play a major role as an advisor to everybody,” he said when asked if Deve Gowda will play a national role after the 2019 Lok Sabha elections.

When asked about his unhappiness with media for giving more attention to south Indian actor Sumalatha Ambareesh, an independent candidate contesting from Mandya Lok Sabha constituency where his son Nikhil Gowda is also in the fray, he said: “Regarding Mandya issue, I am not upset.”

“But unnecessarily, our local media friends for the last four months continuously, even during midnight, early morning, afternoon, evening whenever you switch on the TV, they had only been projecting Mandya issue by projecting that (Sumalatha) lady as a big leader. They are trying to create an image among the voters. That is why I criticised media friends.”

Responding to PM Modi’s attack over “dynastic” politics in the Congress-JD(S) alliance, Kumaraswamy said: “People want us. They are demanding our family members to contest. This is not a dynastic issue. If people want our leadership, they will accept. Otherwise, they will reject us. It is because of the pressure from the people and party workers we have fielded our family members in the poll.”