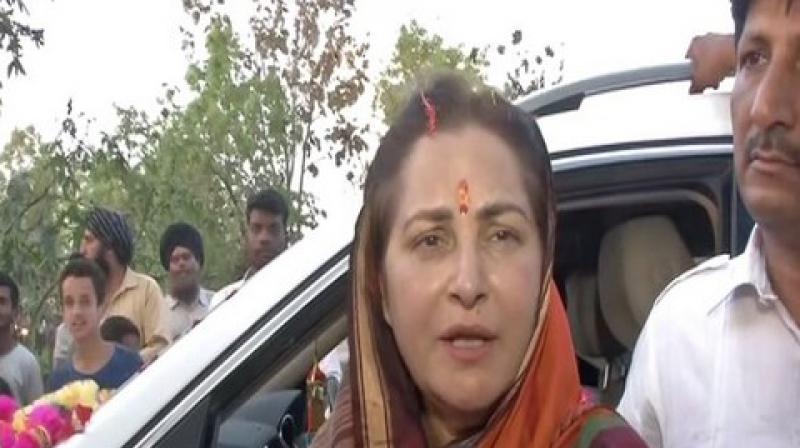 Jaya Prada, the Bharatiya Janata Party candidate from Rampur, has slammed her opponent Azam Khan, for making a derogatory remark against her a few days ago, saying the Samajwadi Party leader has not only insulted her but the entire women community. (Photo: ANI)

Rampur: Jaya Prada, the Bharatiya Janata Party (BJP) candidate from Rampur, has slammed her opponent Azam Khan, for making a derogatory remark against her a few days ago, saying the Samajwadi Party leader has not only insulted her but the entire women community.

"Azam Khan has insulted not only me but all the women of Rampur. Every woman wants to be respected but Azam Khan is compelled by his habits. People here are not going to forgive him," the actor-turned-politician told ANI.

"Every election season, Azam Khan launches an attack on a woman candidate. He has not only targeted me but also Mayawati in the past. He is making a mockery of democracy. He refers to himself as women's brother but on the other hand, he is making such derogatory remarks on women," she added.

A few days ago, without naming Jaya Prada, Khan while addressing an election rally in Rampur Khan had stated, "...You got represented by her (Jaya Prada) for 10 years. People of Rampur, people of Uttar Pradesh and people of India, it took you 17 years to understand her reality. But I could recognise it in 17 days that she wears a khaki underwear."

The colour khaki is often associated with Rashtriya Swayamsevak Sangh.

Amar Singh too criticised Khan for making an objectionable remark on her colleague and said, "If Jaya Prada loses this election then the women too will lose their identity. If the demon like Azam Khan wins this seat then it will be seen as a victory of Raavan, Duryodhan and Dushashan."

Singh also claimed that Khan was taking his name while electioneering despite knowing that he was in the hospital.

"I am a Kshatriya so it is my duty to fight the evil forces. At present, all the women and the people who respect women are supporting Jaya Prada," he added.

Polling for Rampur Lok Sabha seat will be held in the third phase of polls on April 23. Counting of votes will take place on May 23.