This comes amid attack by the Congress alleging that Modi government has been undermining the institutions. 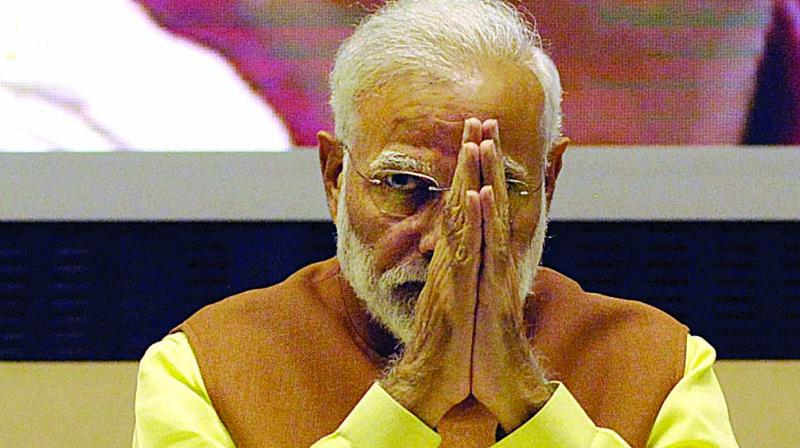 PM Modi on Wednesday wrote in his blog that people voted decisively in the 2014 general elections for 'honesty over dynasty' and 'development over decay'. (Photo: File)

New Delhi: In his latest attack on Congress, Prime Minister Narendra Modi said that India’s institutions have been the biggest casualty of dynastic politics.

PM Modi on Wednesday wrote in his blog that people voted decisively in the 2014 general elections for “honesty over dynasty” and “development over decay”.

“As you go to vote- remember the past and how one family’s desire for power cost the nation so greatly. If they could do it then, they can surely do it now. Eternal vigilance remains the price of liberty,” he said.

Lashing out at Congress, Modi further stated, “The sense of entitlement can be seen in their conduct towards routine legal processes. At present, their top leadership is on bail vis-a-vis a major scam. When the authorities seek to question them on their dealings, they do not even bother to reply. Are they scared of accountability or do they not believe in it?”

“Congress’ modus operandi is simple- reject, discredit and threaten. If a judicial verdict goes against them, they reject it, then they discredit the judge and thereafter, talk about bringing impeachment motions against the judge,” he added.

This comes amid attack by the Congress alleging that Modi government has been undermining the institutions.

Referring to “ordinance tearing” by Congress president Rahul Gandhi in 2013, Modi said, “A policy decision taken by no less than the Union Cabinet was torn into pieces by someone who was not a member of any ministry and that too, in a press conference.”

Continuing his attack, Modi cited the creation of the National Advisory Council led by UPA chairperson Sonia Gandhi and said, “The NAC was created as a body parallel to the Prime Minister’s Office. And then, Congress talks about institutions?”

Modi said that Indians were tired of the country being in the “Fragile Five”, where corruption, cronyism and nepotism made headlines instead of anything positive.

He said India voted to shed the baggage of the past in pursuit of a better future.

“Over the last five years, the Indian economy has been the cynosure of the world’s eyes,” PM Modi

In his blog, PM Modi highlighted the BJP-led government’s achievements in the last five years.

“India has made remarkable achievements in sanitation coverage (from 38pc in 2014 to 98pc now), banking the unbanked, financing the un-financed, building futuristic infrastructure, homes for the homeless, providing healthcare for the poor and educating the youth,” he said.