Adityanath, the 21st CM of UP, has promised to work without any discrimination, pursuing BJP's agenda of 'sabka sath, sabka vikas'. 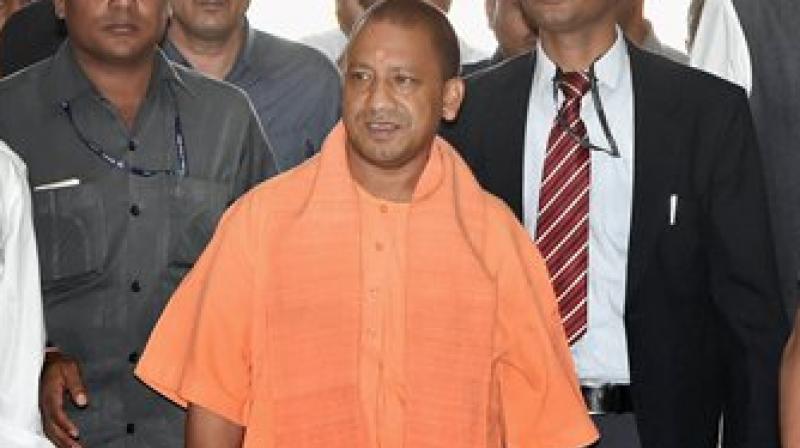 UP Chief Minister Yogi Adityanath arrives for a meeting with police officers at Lok Bhawan in Lucknow. (Photo: AP)

Lucknow: Uttar Pradesh Chief Minister Yogi Adityanath on Monday directed officials to declare their assets within 15 days, following up on a similar order to ministers after assuming office on Sunday, a move aimed at uprooting corruption.

Separately, Adityanath directed state DGP Javeed Ahmed to ensure that there was no laxity in improving law and order situation, hours after a BSP leader was shot dead in Allahabad.

At his first interaction with senior officials in Lok Bhawan, the Chief Minister also instructed them to ensure implementation of BJP's 'Sankalp Patra' (manifesto).

"It was an introductory meeting with UP government officials. The officials were told that the Sankalp Patra has to be implemented," Deputy Chief Minister Keshav Prasad Maurya, who was also present, told reporters.

The meeting was attended by around 65 senior officials.

The officials were given a copy of BJP's 'Sankalp Patra' and instructions have been issued to them to prepare a roadmap for their respective departments, a senior BJP leader said.

"As uprooting corruption is the main agenda of our party, the CM in his first introductory meeting with his new ministers directed them to give details of their income, movable and immovable properties with 15 days," cabinet minister Srikant Sharma had said on Sunday.

Official sources said Adityanath expressed concern over the attack on the BSP leader and stressed that restoring law and order was the top priority of his government.

60-year-old BSP leader Mohd Shami was on Sunday night gunned down by assailants close to his residence in Mauaima police station area, 40 km from Allahabad.

The UP DGP has been asked to hold video conference with the district magistrates and the superintendents of police of all the 75 districts of the state to take stock of law and order situation and other administrative issues, they said.

Maurya told reporters that the first meeting of the state Cabinet would discuss all key issues mentioned in BJP's 'Sankalp Patra', which include loan waiver to farmers and ban on mechanised slaughter houses.

Sharma told mediapersons that his meeting was just a courtesy call. "We will work for the welfare of the people with full vigour and ensure that the work is visible on the ground," he said.

Earlier in the day, Chief Secretary Rahul Bhatnagar, the DGP and Principal Secretary Home Debashish Panda met the chief minister at the VVIP Guest House here ahead of his meeting with the senior officials of the state.

The portfolios to the new ministers are likely to be announced soon. A 47-member Council of Ministers, including two deputy CMs, was administered the oath of office and secrecy by Governor Ram Naik on Sunday.

Adityanath, who was sworn-in as the 21st Chief Minister of UP, has promised to work for all sections of the society without any discrimination, pursuing the agenda of 'sabka sath, sabka vikas'.