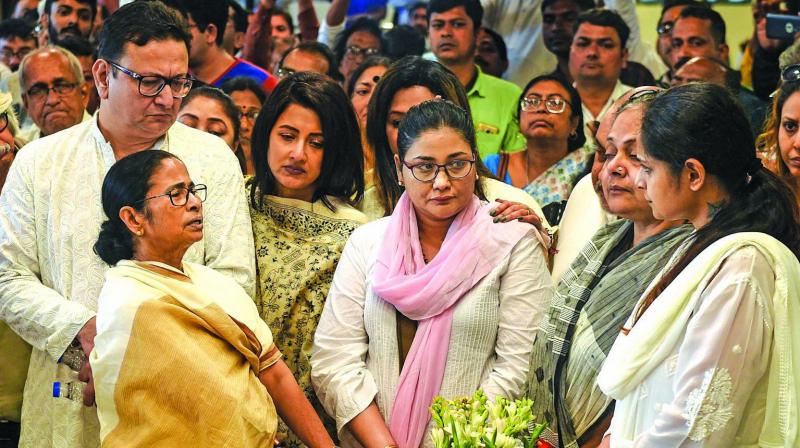 Kolkata: A day after actor-turned-politician Tapas Paul’s death due to cardiac arrest in Mumbai, West Bengal chief minister Mamata Banerjee blamed the Centre and its agencies for taking his life through “politics of vendetta” and “pressure tactics”.

She alleged that Paul, as a second-time Trinamul Congress MP, became “devastated” and “traumatised” after his arrest by the Central Bureau Investigation in Rose Valley chit fund scam and then spending a long time in custody.

On Wednesday morning, Paul’s body was brought from his residence to Rabindra Sadan with gun salute at Keoratala Crematorium.

Paying her last respects to him, Ms Banerjee claimed, “Will it be appropriate if artists die before time after landing in trouble for working in a production house or a TV company as brand ambassadors? This reflects politics of vendetta. No one is spared from the Centre’s dangerous conspiracy of revenge. This is the third such death which is terrible and also untimely.”

She elaborated, “First was Sultan Ahmed (Trinamul MP accused in Narada sting operation) who fell to death in the bathroom after getting a letter and a phone call. Then Arjuna awardee footballer Prasun Banerjee’s wife died failing to cope with the pressure. If anyone violates the law, the law can take its own course. But long humiliation is killing people. Let the people know the truth. Tapas became mentally devastated and traumatised by the Central agencies’ torture. Before dying, he could not know what his fault was.”

The chief minister  claimed, “A No 1 filmstar like him, not in Bengal but all over the country, had to spend a year and a month in jail. What was his fault? I asked Sudipda (read: Sudip Bandopadhyay also a Trinamul MP who was arrested by the CBI in Rose Valley scam) because he was there with him at the same time.”

Hitting back to her, Union minister Babul Supriyo accused her of playing politics over the dead.

“I condemn her dirty politics in front of an artist’s body. Why didn’t she visit Paul while meeting Sudip in the next room of the hospital in Bhubanewswar? It is only possible for Didi to link mental pressure with the Centre’s deprival,” he said.

Echoing the views of Mr Supriyo, Congress Rajya Sabha MP Pradip Bhattacharjee said, “No one should play politics over the dead. It is not only unfortunate but also a sign of perversion in context of political thoughts.”

CPIM) MLA Tanmoy Bhattacharjee said, “Ms Banerjee did not inquire about Paul after he was not given a ticket by the Trinamul. Paul also lamented to many that no one kept in touch with him later. It is the CM’s   habit to create a gimmick on every issue in order to reap political benefits.”