UP: Congress, SP agree on seat-sharing, RLD out 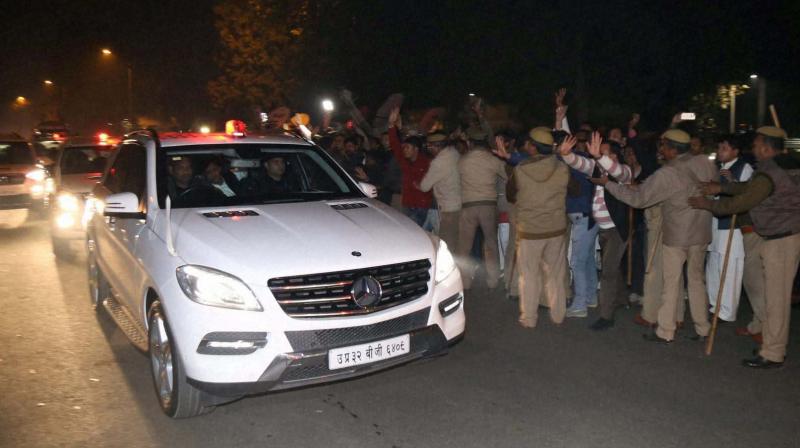 Lucknow/New Delhi: The prospect of a “mahagathbandhan” (grand alliance) in Uttar Pradesh virtually collapsed on Thursday with the Samajwadi Party rejecting any alliance with the Ajit Singh-led Rashtriya Lok Dal (RLD) and announcing that it would contest 300 of 403 Assembly seats, while the rest 103 would be given to the Congress.

The JD(U), which was expected to campaign for Akhilesh Yadav to garner the Kurmi vote, clearly said on Thursday that it was with the RLD. JD(U) spokesman K.C. Tyagi told this newspaper: “We are with the RLD.” Pointing fingers at the SP, he said: “The SP as a senior partner has failed to engage with the RLD and with us.” Mr Tyagi, however, refused to elaborate further on this issue.

The BJP, meanwhile, unleashed Union minister Anupriya Patel, leader of the Apna Dal, an NDA ally, to “make up” with her mother Krishna Patel who leads another faction of the outfit, that was expected to join the Akhilesh Yadav bandwagon.

In Lucknow, SP national vice-president Kironmoy Nanda, talking about the proposed SP-RLD alliance, said: “We will forge an alliance only with Congress. Not ally with RLD. We will contest 300 seats, leaving the rest for the Congress.”

RLD spokesman Anil Dubey said his outfit “wanted the seats of our choice, but there was no agreement on it”. State RLD chief Masood Ahmad said his party, under the leadership of Chaudhary Ajit Singh and in alliance with smaller parties, would contest on its own. “For any alliance, the leaders of all three parties should have come together on one negotiating table. We simply kept hearing statements on TV... this is not the way to enter an alliance”, he said. 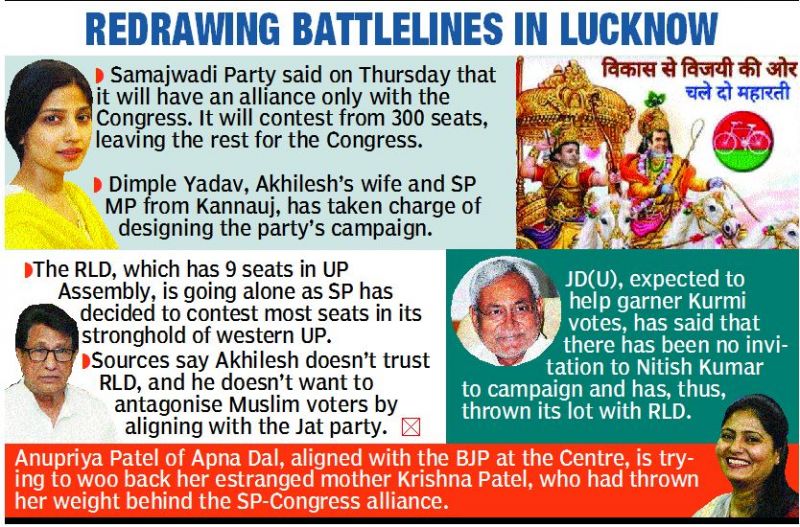 The SP-RLD talks hit a roadblock Thursday when RLD leader Jayant Chaudhary demanded not less than 30 seats, while the Akhilesh Yadav-led party was ready to offer only 22 seats. Incidentally, while the SP spoke of an alliance with the Congress, a few issues are still to be resolved between them. Some of these contentious issues include the Assembly seats in Rae Bareli and Amethi that are now held by SP. The Congress wants all Assembly  seats in these two key constituencies, that are represented in Parliament by Sonia and Rahul Gandhi respectively, but the SP is unwilling to let go of its sitting berths. The SP is also unwilling to tie up with RLD as the Samajwadis fear that distrust between Jats and Muslims in western UP post Muzaffarnagar riots would hit its minority votebank.

SP leaders have argued that Muslims in western UP are not likely to support the RLD and this could eventually have an adverse impact on the SP’s Muslim votebank across the state. “We feel an alliance with Congress is the best in the state,” a senior SP leader said. The Muslim population in western UP is around 46 per cent, and the SP is in no mood to risk this huge votebank.

Sources also said the trust factor between the SP and RLD was another issue that had blocked finalisation of the deal. “At the end of  the day Akhilesh does not trust the RLD and feels in a fractured mandate scenario Ajit Singh could swing towards the BJP if the situation demands,”  a senior SP leader commented.

It may be recalled that the RLD had earlier held secret parleys with the BJP. The RLD’s deal with the BJP had not taken off due to differences over seat-sharing, sources said.

The collapse of the grand alliance even before it could be formed has raised the BJP’s hopes in UP, though the SP national vice-president declared that “the SP-Congress alliance will get an absolute majority in the state and Akhilesh will become chief minister again”.