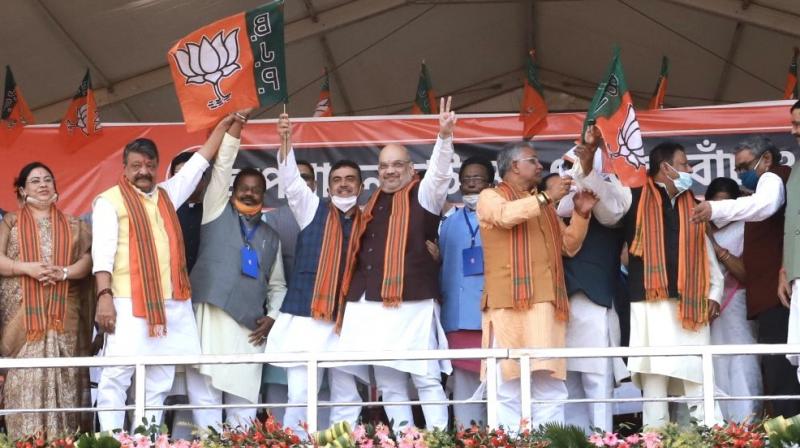 Joining the BJP on Saturday in his home turf, Shubhendu Adhikari described union home minister Amit Shah as his "Dada" and "Aan Baan Shan" of the country.(Image: Twitter/@AmitShah)

"The union home minister, who has accepted me as a primary member of the world's biggest party, BJP, that believes in pluralism, is my elder brother, my Dada and Aan Baan Shan of our nation. He fulfilled all the promises he made earlier, within eight months of winning the Lok Sabha Election in 2019 under Prime Minister Narendra Modi's leadership," Adhikari said, addressing the grand rally in Midnapore.

Revealing his long connection with Shah for the first time, Adhikari said, "My relation with him started when he was the BJP all India general secretary, in charge of East Uttar Pradesh. He led the party to victory in Lok Sabha polls in 2014 and steered the saffron storm in UP. I met him in a small room in the party's old office at Ashoka Road. The present UP health minister Siddarth Nath Singh had arranged the meeting. But he never asked me to join the BJP."

Adhikari further added that "When I was infected by Covid-19, none from the party I then belonged to inquired about me. But Mr Shah did twice. I offer my Naman to him."

Lashing out at Mamata and her nephew for branding him as a "traitor," he alleged, "Yesterday an old TMC friend sent me a video showing my slogan 'BJP Hatao, Bharat Banchao' before the Lok Sabha polls. I replied to him that my slogan today here would be 'Tolabaj Bhaipo Hatao' (Remove Extortionist Nephew)."