The Andhra Pradesh CM told reporters that the fresh date for the meeting of non-BJP parties will be announced very soon. 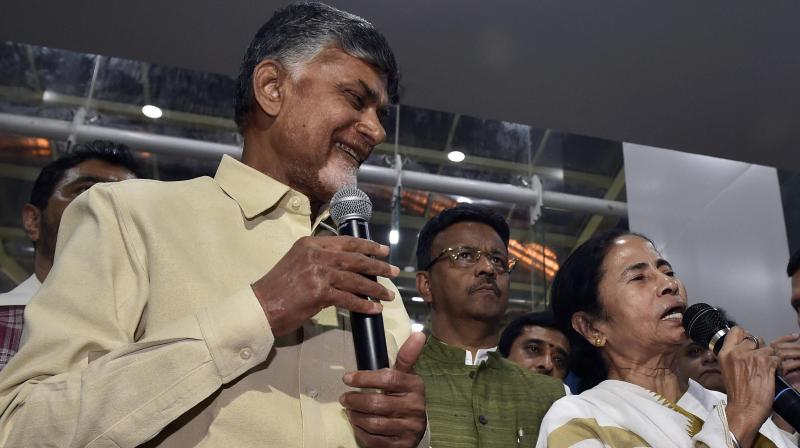 CM Mamata Banerjee reiterated that all parties will come together to fight unitedly against the BJP. (Photo: PTI)

Kolkata: Andhra Pradesh Chief Minister and TDP president N Chandrababu Naidu on Monday announced the postponement of a November 22 opposition conclave in Delhi to chalk out details of the proposed anti-BJP front.

Emerging from an hour-long meeting with his West Bengal counterpart Mamata Banerjee here, Naidu told reporters that the fresh date for the meeting of non-BJP parties will be announced very soon.

Flanked by the Trinamool Congress chief, Naidu attacked the NDA government at the Centre alleging that institutions like the CBI, ED, Income Tax department, RBI and CAG are under "severe pressure". Andhra Pradesh and West Bengal governments had on Friday withdrawn the 'general consent' accorded to the CBI to conduct probe and raids in their states.

"We wanted to meet on November 22 earlier because of the elections... We wanted to make it before Parliament (winter) session. Those who are opposing the BJP will join and discuss. We will chalk out a programme to move forward take this momentum further on the agenda to protect the nation," the Telugu Desam Party chief said, adding the fresh date for the meeting will be decided very soon.

CM Mamata Banerjee reiterated that all parties will come to fight unitedly against the BJP.

Addressing reporters after the meeting, she said, "Today we discussed the future plan. We can tell you one thing, we are all together to fight against the BJP government to save the nation."