Imarti Devi, set to contest as a BJP candidate, was a minister in the Kamal Nath government which fell in March this year 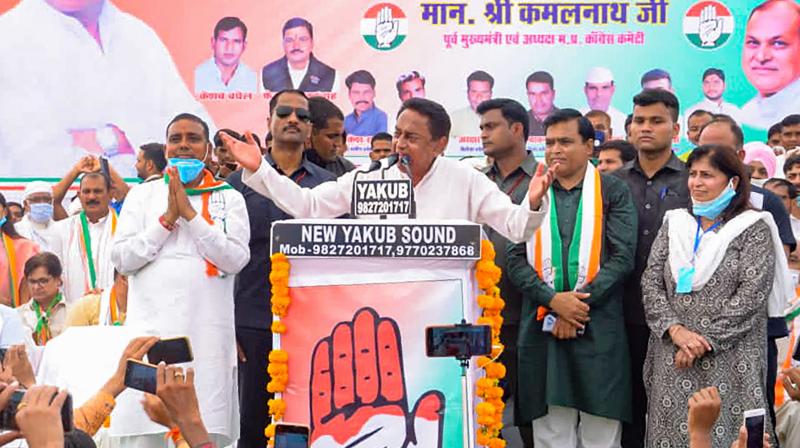 Bhopal: Congress veteran Kamal Nath on Sunday unwittingly joined ranks of politicians who have made crass, sexist remarks by describing Madhya Pradesh women and child welfare minister Imarti Devi, who hails from a dalit community, as an ‘item’.

Addressing an election meeting at Dabra under Gwalior district in MP, 74-year-old Nath said, “Who is she…(the crowd calls out Imarti Devi’s name)… why should I take her name… you all should have warned me… what an item!).

Shockingly, former minister and senior Congress leader Bijoylaxmi Sadho who was present at the dais burst into laughter along with others while reacting to Nath’s sexist remarks.

Devi, who is contesting from Dabra assembly constituency in the November 3 by-elections as a BJP candidate, was also a minister in the Kamal Nath government which fell in March this year following resignation of 22 Congress MLAs including.

BJP took strong exception to the ‘derogatory’ remarks by Nath against the woman minister and moved the Election Commission demanding to bar him from campaigning in the November 3 by-elections to 28 assembly constituencies in the state.

The party declared to move the women commission and national scheduled caste commission demanding action against Nath for making insulting remarks against the woman minister.

Chief minister Shivraj Singh Chouhan expressed shock and dismay at Nath’s ‘outrageous’ utterances against a woman minister, saying it smacked of his arrogance and narrow mindset.

He declared to observe a 2-hour silence on Monday in protest against it.

Congress however tried to defend Nath saying that he never took the minister’s name in his entire speech.

“Nath did not take the minister’s name. BJP is trying to misguide the people on the issue”, Congress spokesman here Narendra Saluja said.

Earlier in July, 2013, another Congress veteran and former chief minister Digvijay Singh triggered a row by calling his party colleague and former MP Meenakshi Natrajan, as ‘sau tunch maal’- a northern colloquial that loosely translates into a “desirable object”.